Castlevania: Circle of the Moon/Locations

See the walkthrough for details on how to complete each area. 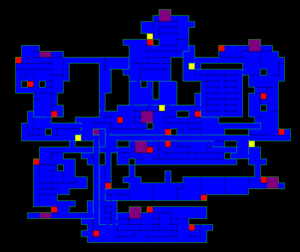 There are several distinct areas of Dracula's castle, all of which have their own set of enemies and items to collect. Generally speaking, when you complete one area (by defeating the local boss), you'll get a relic which will give you a new ability that you can use to access the next area.

You have to go through every area, except for the Underground Gallery, Underground Warehouse, and Battle Arena. It is, however recommended that you complete these areas, as each will get you several important relics, DSS Cards, and pieces of armor. You will also gain a significant amount of experience, raising your level and making you much stronger for the later areas.

The areas are listed in the order that you normally encounter them, however some areas can be entered, or even finished, out of the expected order.

Enemies listed as "After Boss X" appear once the boss is defeated, often replacing the weaker enemies that appeared originally. "Cards" list the first chance you have to get a specific card, however you can also get the cards in later areas if you don't get them as soon as possible. "Access" refers to any relics that you need or actions you have to take in order to enter the area.

See the Catacomb walkthrough for more.

The lowest part of the castle, where you begin your journey after a rather long fall. The exit is above the first room you get to after you climb down the shaft, but you'll need the Double in order to reach the ledge. This area is mostly filled with the undead, though the Earth Demons can be a surprising challenge at low levels.

The long climb out of the Catacombs into the Audience Room is through the Stairway. The entrance to the Eternal Corridor is here, but that is only accessible later in the game. The Stairway consists almost entirely of jumping back and forth between platforms while Gremlins, Skeletons, and Bone Heads try to knock you around.

The second major area in the game (as in, one with a boss). From the west side, you'll have to pass over the Outer Wall in order to get to the east side. At the end is the Necromancer who advances the story a bit and blocks the way to the Tackle

. Once you have the tackle, you'll be able to get from one side of the Audience Room to the other without going over the Wall.

Consisting of two very large outdoor areas, you first pass over the Wall in order to get to the other side of the Audience Room. Eventually you'll come back to get to the Observation Tower. Simply passing through is easy enough, but you do have to deal with those annoying Brain Floats if you want all of the power-ups. Once you drop down over the battlements, head to the left side of the long room to find a transporter room (take it so you can clear the path to the one in the Audience Room one you couldn't access earlier).

See the Machine Tower and Underground Warehouse walkthroughs for more.

Another almost trivial area. This one only serves to connect the Abyss Stairway to the Machine Tower and later to the Underground Warehouse. Though you can't go through it, the main castle gate is located here as well.

The Clock Tower. An area that has been in almost every single Castlevania since the beginning. In addition to Medusa Heads and moving platforms, you'll have to deal with Heat Shades and other enemies that can hit you from afar. At least the boss is incredibly easy, because getting to him certainly is not. If you come back near the end of the game, you can get the Uranus card

and the Dark Armor

(the second best piece of armor in the game).

The horizontal version of the Abyss Stairway — it's just a means of passing from one section of the castle. There isn't too much to collect here, the enemies are very strong, and you have a ways between save points. Simply run through, avoiding most of the enemies, rather than fighting. Once you reach the end and can save, return and fight the enemies for the equipment that they drop. 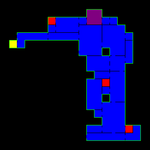 The other traditional area that appears in countless games in the series. You'll spend lots of time wall-kicking your way up to the top of massive rooms, and a lot of time getting knocked right back down by some of the more annoying enemies in the game. On the plus side, you can get quite a number of power-ups and one of the most useful cards in the game.

Back in the Eternal Corridor, there was a pit near the end. Jump down it and head through the door. If you've hit the switch at the top of the Chapel Tower, you'll be able to pass through. This area can be very difficult, as the vast majority of enemies can poison you. You may want to stick your head in the Underground Waterway (accessible via the Abyss Stairway) and get the Neptune card

before going through the Gallery. When combined with the Manticore card, you'll be immune to poison. 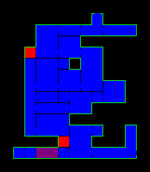 Potentially one of the more unpleasant areas in the game as the enemies are quite strong and numerous. This is also a large area with many side-paths. While you should explore them all, it is best to head straight through and get to the save point first, then double back to go through each area one at a time. Once you finish the Warehouse, you'll get the Cleansing

while, while not giving you any new abilities, will make the Underground Waterway significantly easier. After defeating Death, some new enemies will appear in old areas. One of the most important is Lilim, now in the Machine Tower, who drops the Dark Armor

Connected to the bottom of the Abyss Stairway, the Waterway can be accessed as soon as you hit the statue-destroying switch at the top of the Chapel Tower. That said, you will probably want to go through the Underground Warehouse first, since the Cleansing relic will purify the waters. If not, you'll take massive damage for ever second you spend underwater. To make this area even easier, simply equip the Neptune/Serpent combination and you'll be immune to water based attacks.

High above the Outer Wall, this is the last major area you're required to go through. Needless to say, it houses some of the strongest enemies in the game. Once you've finished this area you'll be able to open the door to the Ceremonial Room and face Dracula. You may also want to try your luck at the Battle Arena before the final confrontation. 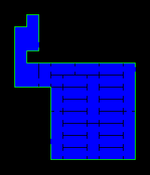 Located off the west side of the Chapel Tower, the Battle Arena is the ultimate challenge of the game. You will need to be at a much higher level to finish all 17 rooms than you do even to beat the game. Besides eternal glory, you receive the Shinning Armor

, which is the strongest armor in the game upon completion of the Arena.

The smallest area in the castle, the Ceremonial Room is where Dracula is holding Morris Baldwin until he can complete the resurrection ritual. It's at the top of the pit that you fall through in the beginning, right behind where Dracula was standing.