Castlevania: Circle of the Moon/Observation Tower 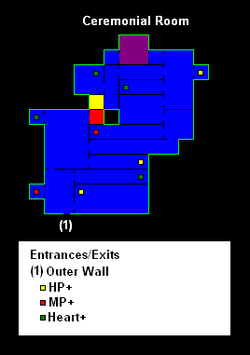 With the defeat of Camilla in the Underground Waterway, there's only one place left for Nathan to search for a way into the Ceremonial Room.

First, equip the Pluto/Manticore combination and use the Boomerang

as your primary weapon. If you can't keep your MP up enough, get the Sage Robe from Lilith.

From where you jump into the Tower from the Outer Wall head up the left side. Don't touch the Legions, or you'll be cursed; instead, wait for them to meander into range and then attack. On the third ledge, jump left and break the wall to get a MP Plus

(35/36). Instead of continuing up, jump through the gap in the column and go through both hallways on the right. The upper one contains a Heart Plus

Head back to the upper left corner of the entrance room and jump through the ceiling. In this room, work your way up to the top while avoiding the Evil Towers, which can petrify you. At the top, break the left wall to get a Heart Plus

(34/36). On the right side, the upper door leads to a save room, and if you drop all the way to the bottom you can break the right wall and get a HP Plus

(41/43). Go through the middle door to get into a hallway. Defeat the Dullahans by waiting just at the edge of where they turn around and whipping them as they come by. Jump through the ceiling and into another large room; this one filled with teams of Frozen and Heat Shades. Neither type should be a significant threat to you at this point, so just whip them and carry on. Go over the top of the room and back down the left side. The lower door takes you to a hallway with the last MP Plus

(36/36) in the game, as well as a couple of Alraunes and Demon Lords (the latter drops Strength Armbands

). The upper door takes you into a very large room and introduces you to the Dark Armors. Kill them as quickly as possible with the Boomerang

In the next room, head up the right side until the path opens up so you can get to the left side of the room. Before going to the other side, break the wall on the right (the opening is about level with the platform you're on). Inside you'll find a candle with a Boomerang

if you don't have one, an HP Plus

(42/43), and a lone Dark Armor. Kill this Dark Armor over and over again until you get two Double Grips

and equip both for a 75 point boost to all four stats.

Now head to the left side of the large room and drop all the way down. Jump into the door way and you'll be in a long hallway with a Heart Plus

(35/36) at the end. Go through the doorway directly above this one and you'll be in a room with the Devil. Strong, lots of HP, high defense, and hard to avoid attacks means that it's often best to just ignore him. He drops the Mirror Armor

, but you can get better equipment elsewhere, and twice as much experience for killing Lilith. Go through the door on the other side and you'll be in a tall room with several Legions. Jump down to the lowest ledge on the left (you can't see it from the entrance) and break the wall. You'll be in a large room with Dark Armors, Evil Pillars, and the last Heart Plus

(36/36). Grab it, head back to the tall room and drop down to the bottom. Go through the door and you'll be in the fifth warp room. If you want, warp back to the Audience Room and save.

From the warp room, head back to the top and through the Devil's room. Make your way up to the top of the large room and you'll be in a small room with two large heart dropping candles. Fill up if needed, then go in the boss room and you'll find Hugh waiting for you. He'll talk a bit and say that he's going to defeat you to prove himself worthy, and then attacks you.

Hugh attacks and moves fast, but is not exceptionally strong. He has all of your sub-weapons, except for the Stopwatch

. He likes to use the Holy Water

and also has a couple of special moves. Basically just thrown boomerangs at him or summon Cockatrice (depending on your mode) and defeat him before he defeats you.

Hugh comes to his senses and apologizes, admitting that he was always jealous of Nathan. Past his room you'll find the Last Key

, which will let you into the Ceremonial Room. After defeating him, heal if necessary, then go back to the warp room. Save your game and collect any power-ups that you're missing (there is one HP Plus in the Ceremonial Room), and get whatever armor is best for your mode.

Having retrieved the Last Key, you can enter the Ceremonial Room and fight Dracula. You may also complete the Battle Arena, though you may want to level up and stockpile items first.