Castlevania: Circle of the Moon/Story

From StrategyWiki, the video game walkthrough and strategy guide wiki
< Castlevania: Circle of the Moon
Jump to navigation Jump to search

Castlevania: Circle of the Moon | Table of Contents | Gameplay | Walkthrough

As the story begins Morris Baldwin, Nathan Graves, and Hugh Baldwin, are attempting to stop Camilla from resurrecting Count Dracula, however they arrive too late. Despite not having his full powers, Dracula is able to cast Hugh and Nathan into a pit with ease. Dracula and Camilla capture Morris to use as part of a ritual that will restore Dracula completely, but must wait until a full moon. Nathan and Hugh survive the drop and end up in the catacomb beneath the castle. Hugh runs off in an attempt to save Morris by himself, telling Nathan to stay out of the way.

Nathan then goes off on his own to find his way back to the surface and find both Morris and Hugh. He eventually defeats Cerberus and gets out of the catacomb. Going into the main part of the castle he encounters the Necromancer, who tells Nathan about the ritual to restore Dracula's power by sacrificing Morris. Furious, but resolved, Nathan kills the Necromancer and goes to find Morris before the full moon, still wondering what Hugh is doing.

Still trying to find a way to break the seal on Dracula's chambers, Nathan heads into the Machine Tower, where he fights the Iron Golem. After the battle he runs into Hugh, who accuses Nathan of trying to steal his glory and then runs off. Confused, Nathan carries on, heading to the chapel in the eastern tower. At the top of the tower, he again encounters Hugh who, despite being wounded, again accuses him of trying to steal his glory. Nathan kills Adramelech only to be told by Hugh that he's failure who only got as far as he did because he was the son of Morris' friends.

Nathan continues on, defeating the Dragon Zombies in the Underground Gallery and Death in the warehouse. After cleansing the Waterway, Nathan finally encounters Camilla. She talks about why she and her cult resurrected Dracula, which Nathan brushes off as arrogance. She then gloats about how she and Dracula have been manipulating Hugh's mind (apparently for the fun of it). Nathan defeats her, but she continues to boast about how she was successful and they only need to wait for the full moon. Nathan runs off to find Hugh and Morris before it's too late. He finds Hugh in the Observation Tower, only to get attacked by his friend. After defeating – but not killing – Hugh, Dracula's influence is removed and he comes to his senses.

Hugh tells Nathan that he's always been jealous of the fact that it was Nathan who got the Vampire Killer whip, and Camilla was able to exploit that. He says that he now realizes that Morris must have seen that dark side to him years ago, which is why he gave Nathan the whip. After making peace with Hugh, Nathan grabs the key to the Ceremonial Room and goes to challenge Dracula. 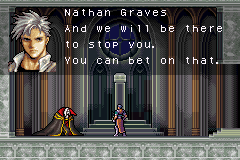 Dracula boasting, even in defeat

He finds the Count about to start the ritual, who is mildly impressed that Nathan got as far as he did. He mocks Nathan's concern for Morris then talks about manipulating the darkness within Hugh in order to turn him against Nathan. Tired of the talk, Nathan attacks Dracula, eventually beating him. 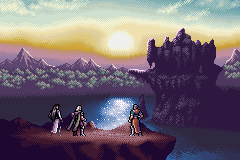 Hugh appears and helps Morris escape from the castle while Nathan stays behind to finish off Dracula, who is not yet defeated. After beating a mutated form of Dracula on an different plane of existence, the Count tells him that it was a wasted effort anyway, as he will always return. To which Nathan replies "And we will be there to stop you.". Nathan flees the castle before it crumples, finding Hugh and Morris waiting for him. Morris thanks him and congratulates him on becoming a real Vampire Killer. He also thanks Hugh, but tells him that he must start his training again in order to overcome his own darkness. Hugh agrees and jokingly tells Nathan that he'll take over as Vampire Killer if Nathan ever goes soft.