Castlevania: Circle of the Moon/Underground Gallery 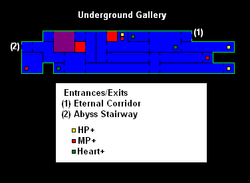 Having broken all of the metal statues that block the way to the underground areas, Nathan sets out for the Underground Gallery, a dungeon directly below the Eternal Corridor.

Having decided to go through the Gallery before the Waterway, before going through the Gallery you should first stop by the…Waterway. You passed by the entrance near the beginning of the game: it's directly below the first save point of the Abyss Stairway. You can get there by warping from the Eternal Corridor to the Audience Room, jump down the shaft into the Catacomb, and then climb up the Stairway. Another way is to go through the Eternal Corridor and then down the Stairway. In any case, equip luck boosting equipment and the Venus/Mandragora combo before heading in.

In the Waterway, spend as little time as possible in the red water, as you will lose HP very quickly. You'll see a tall pillar along the left; break the bottom to get a Heart Plus

(17/36). Keep killing the Frozen Shade to get a Star Bracelet

(and a lot of experience). Avoid her projectiles as they freeze you on contact.

Once you're done with her, go back and save if you want, then jump across the water (jump as far out as you can from the platform and once you land in the water, immediately jump out again) and go into the next room. To get across this pool, drop straight down onto the ledge above the pool then run and double jump across the platform. You'll take damage no matter what, however you can minimize it to 15-25 HP once you get the timing down. Just don't fall into the pool as you will take a lot of damage getting out of it and the Spearfish can hurt you if you jump on it.

On the other side of the pool is a lever (don't hit it) and wading in the water is an Ice Armor. As long as you stay on the ledge above it and don't get too close it won't be able to hit you. Kill it, then head back, double jumping over the pool, then leave and repeat the process. Keep a close eye on your HP, as you will take damage every time you cross the pool, and you will need to keep a bit of HP in reserve to make it out of the Waterway. When your life gets too low, either heal with Jupiter/Mandragora or go back to the save room in the Abyss Stairway. You'll probably be here a while, as the Ice Armor has fairly low drop rates, but keep fighting until you get both the Steel Armor

and the Neptune card

Equipping Neptune/Manticore will prevent you from being poisoned, which will make the Underground Gallery significantly easier. Also of note, Neptune/Cockatrice prevents petrification and Neptune/Serpent prevents you from becoming frozen.

After you get the card, armor, and bracelet, head up the Abyss Stairway and back into the Eternal Corridor. Go to the fifth room of the Corridor and drop down the pit. Go through the door on the left and you'll be in the Underground Gallery.

Slide-kick your way through the Imps (they drop large hearts frequently, so this is a good spot to refill), and drop down. Jump on the switch, drop down to the bottom, and run to the platform. Don't stop to fight the Wrights, or you won't be able to catch it. Slide through the gap at the end to get the Heart Plus

(18/36). Slide back and go through the lower left door. Head left, jumping and whipping the Harpies and Imps. The Imps can be killed easily if you're pressed up against the wall and jump right after they throw a stone.

At this room you can see MP Plus

(29/43) placed at high platforms. It is actually possible to grab them earlier, by luring a Harpy to correct location and freezing her with DSS.

Go through the door on the other side. You'll be in a shaft, on the middle level. There's a save room above you, and the exit is below you. If the Specters are too much of a problem, equip Venus/Serpent. The door on the bottom leads to a long hallway with Death Mantises and King Moths. The King Moths are easy enough to avoid, but can poison you. Break through the stones and pass through the hall to get to another shaft filled with Specters.

First, go through the upper right door and into another long hallway. This one has more Death Mantises and Harpies, and a Thunder Armor guarding a MP Plus

(20/36) at the end. Heal, grab it, and head back to the shaft. Jump to the bottom and go through the door on the right. Another long hallway, except this one has Killer Bees and Man Eaters. The Bees are poisonous and hard to avoid, so keep Neptune/Manticore on, and at the end you'll find a Poison Armor guarding a HP Plus

(18/43). Head back through the hall and take the lower left door in the shaft.

Yet another long hallway with Killer Bees. There are also three Man Eaters, but they aren't a huge threat if you take your time. At the end you'll be in a large chamber. Jump down and kick-slide your way through the Myconids. Jump out of the pit and break the left wall to get a Heart Plus

(19/36). Now go through the upper right door of the large chamber and you'll find yourself in a shaft. Save your game in the middle room then head back down and kill the Poison Armors for a Rainbow Robe

and the nearest Man Eater for the Diana card

. You may wish to keep yourself immune from poison, rather than boosting your luck with Venus/Mandragora as the Poison Armor's attack is difficult to avoid.

Once you have the items (and it may take a while as both enemies have very low drop rates), save your game and then climb to the top of the shaft to get into the boss room.

Big, strong, lots of HP, and there are two of them. This can be a very difficult fight your first time around, but once you get used to them it isn't that bad. Jump on to the lower middle platform (right between the two Dragons) and attack the heads. Use the Jupiter/Salamander fire-shield to damage the heads when they get too close, and throw boomerangs or magic daggers when they're in range. If you take too much damage, jump to the left doorway, and you'll be relatively safe. Use this time to heal and then wait for your MP to recharge before jumping back into the fray. When you're on the ledge the vast majority of their attacks will miss, but the left Dragon can occasionally launch a stray fireball your way, so keep an eye on things.

After the Dragons are defeated, go into the left room to get the Heavy Ring

, which will let you move wooden crates out of the way (just push against them). Head back to the large chamber with the Myconids and Poison Armors (saving along the way) and run, don't walk, through the upper left door. As soon as you get through, jump the gap, run to the left end, and slide through the gap before the bridge collapses. If you don't make it, go back out and try again. Break the wall on the other side of the gap to get to another room with a collapsing bridge. Slide through the gap at the end, drop down and grab the MP Plus

(21/36). Climb back up, go through the broken wall, then wall-kick your way to the top, where a Poison Armor is waiting. If you do get up without being knocked down, immediately jump over it and fight it from the left. If you can't make it up, kick off the wall and whip or throw a boomerang at it. Repeat until it's dead. Head left, push the crate out of the way, and go through the door. You'll be back in the Abyss Stairway, directly below the entrance to the Eternal Corridor.

First you'll need to head to the top of the Machine Tower, making a few stops along the way. From the exit of the Underground Gallery, head up the left side of the Abyss Stairway, into the Audience Room. Note that the Axe Armors have been replaced by Succubi. If you're too weak to handle them, just run past them. Go into the upper section of the Triumph Hallway (the only section you've been in so far), and go all the way to the left. Drop down and go back the right. Push the crate out of the way, kill the Thunder Armor, and grab the HP Plus

Head all the way to the top of the Machine Tower, and go into what was the Iron Golem's room. Whip the candle and a Scary Candle will dive at you. It'll die on its own, but you'll only get experience and items if you kill it yourself. It has a 150HP and you have enough time to get two hits in if you move fast. If you can't do more than 75HP per hit, try equipping Strength Rings. You can use Venus/Salamander or Diana/Griffin to get a more powerful strike, but you'll probably want to boost your luck instead. Eventually it'll drop the Uranus card

Once you get the card, go back down, head over the bridge as you did the first time through, and drop down into the Audience Room. From here head right, into the next room, and go through the bottom right door. Behind a crate is a Poison Armor and MP Plus

(22/36). Head through the top of the large room, into the Outer Wall, and drop into the secret room where you got a Heart Plus originally. You'll quickly notice a flying green enemy — the Nightmare. Use the Uranus/Thunderbird summon to kill it, over and over again, until you get the Needle Armor

, the third strongest armor in the game. Head over the wall, into the warp room, and warp to the Eternal Corridor.

Go back into the Underground Gallery, to the first large room (the one where you rode the platform to the Heart Plus). Go through the upper left door to get a Heart Plus

(20/36). Go through the lower right door, past the four Poison Armors, to get a HP Plus

(20/43). Leave the Gallery, and go back to the Chapel Tower. After you jump into the main part of the Tower, go to the left and grab a HP Plus

(22/43) from the upper left room (you may want to save in the room right below this one when you're done). Continue up towards the top of the Tower, and when you get to the last large room (the one directly under the boss's room), drop down the pit at the top and push the crate out of the way.

Go all the way through the hallway, fighting past Hyenas, Were-jaguars, and Grizzlies until you get to a spot with a door to the left and a pit. Jump into the pit and go into the fourth warp room. Warp to the Audience Room (it'll be the first one) and then decide where you want to go next.