For more details on glyphs, see Castlevania: Order of Ecclesia/Glyphs. 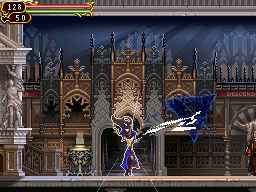 Unlike previous Castlevania games, Shanoa's main attacks are glyphs. She has three glyphs: main glyph, sub glyph, and back glyph. Main and sub glyphs are attacks, while back glyphs are usually supportive. Each glyph uses a certain amount of MP, but MP recharges quickly when not attacking. Each glyph is also associated with a specific attribute.

Glyphs can be obtained in several ways. Some randomly appear after an enemy is defeated. Some can only be absorbed when an enemy is using a glyph. Others can be found in statues. Glyphs are absorbed by holding

. Each glyph absorbed adds 1 point to all attributes and replenishes 10 hearts.

, a glyph union will be performed, which is a stronger attack. Glyph unions cost hearts instead of MP.

Attribute points are gained when enemies are defeated with glyphs. The more points gained, the stronger the glyphs become. Using a color drop will increase the associated attribute by 1000 points. There are seven attributes.

Stats increase when Shanoa levels up except for ATK and DEF.

There are four status effects that Shanoa can experience.

to break free.
Freeze
Same with Stone. But cannot break free with just tapping until you get hit again.

A variety of items can be found throughout the game. Shanoa can equip a head gear, body gear, leg gear, and two accessories. There are also several use items that replenish either HP, MP, or hearts. Many use items don't have a functionality other than a requirement for quests. The maximum number of items that can be carried for each item is 9.

Each map has several save rooms where you can save your progress and restore HP and MP. Warp rooms transport you to other warp rooms that you can select on the map. Press

to interact with them.