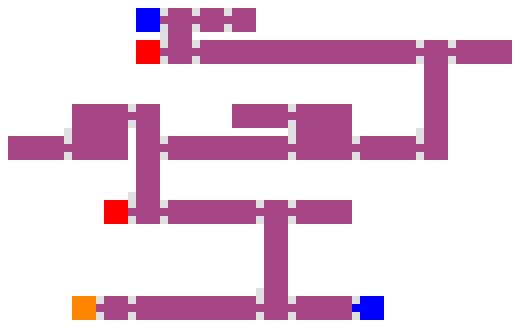 This is the first dungeon in the game. Head right two times to enter the Monastery. In the first room, it's a hallway with skeletons. Head right three times to find a room with a giant bubble. This is a warp point, which can be very useful when you need to travel to other places. Now head left two times and go up the platforms to the top and take a right.

In this room. Fight off the Skeletons and Banshees. Now open the chest at the end for a

Sandals. Now head back to the previous room and head left instead. Go through the hallway. 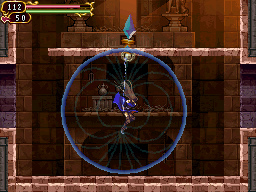 Use the Magnes glyph to reach high places.

At the next room will be the Magnes glyph. Absorb it. You'll be using this a lot throughout the game. The game will tell you how to use Magnes. So use it to reach the top. (Don't forget to enter the room to the left for a save point). At the top will be a chest with a

Cotton Hat in it. Head left.

There's a chest up there, but you can't reach it yet because you don't have the double jump ability. Ignore it for now and head down. On your way you should see a cat and a chest. You need to slide at the right area to get the cat. Once you stop at the cat. Press

to get it. Then slide again and open the chest for a

HP Max up (Which increases your max HP). Slide out of there and continue left. There will be a Bone Scimitar there. When you kill it, it has a chance to drop the Secare glyph. This glyph is better than the Confodere glyph you have. If it doesn't drop it, leave the room and reenter it. It should come back and you can kill it again. Repeat until it drops it and absorb it. All the way to the left are blocks you can destroy, hidden in them is the Cubus glyph. But you'll need a certain glyph union to destroy most of the blocks to have enough time to absorb it. So ignore it and head back to the room where you got the Magnes and fall down a platform and go right.

Go through the hallway again. The next room will have a yellow chest. Yellow Chest hold Relics you can gain to use unique stuff. Open it for a

Book of Spirits, which tells you the enemy's name as you attack it.

Secret Room
At the top left of this room has a secret room. Attack the wall three times to open the pathway to the secret room. Head in there. At the end holds a Hearts Max Up.

Go right. You’ll have to go through another hallway. Next room jump up the platforms. The edge of the first platform on the left can be broken to reveal a hidden

Red Drops. On your way you'll see a blue money bag worth 500 gold. You'll have to jump at the right time to get it. After you got it. Continue up. The right has just a common chest. Continue left through another hallway. At the next room. Head left for a save point (for a boss coming up) So make sure you save it here. Head out from the save point. Use the Magnes glyph to angle yourself to the chest. Once you reach it. Open it for a

MP Max up. Use the Magnes to reach the top. Head left for a warp point. Now head right and touch the door. The door will open up. A door like this has a boss next room. So be prepared. Head inside it and get ready for a boss. 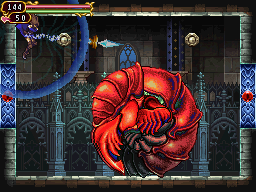 For a first boss, he isn't really that tough. Once you know his three attacks. It's really easy. Just keep thrusting at him dodging his moves to beat him.

Once Arthroverta is defeated head right to the next room. Scene. You can now go to Wygol Village. So use the warp point near the boss room (if you found the two warp points) to get out quicker. If you didn't find the two warp points, you'll have to get out the hard way. Once you get back to the travel map. Head toward Wygol Village (A icon with the word NEW! will be your next destination).

On hard mode, the second room in the Monastery will have endless waves of bats.