Castlevania: Symphony of the Night/Long Library

The first time visiting here, you shall buy the Jewel of Open in order to unlock a few areas.

(56,16)
You are greeted with three Dhurons. One of the lamps contains Uncurse, and it can be collected many times. It may be a good idea to stock some, but they will be useless once you have Heart of Vlad.
(53,16)
Take a detour to the left, go through a few rooms with Fleamen and Dhurons, and get a Bronze Cuirass at the last room, then return here and move up.
(53,15)
In this large room, you will first meet some Ectoplasms. These flying goos are strong against cut, and touching them will inflict curse, hindering your attacks for quite a while. The good news is, one of the first lamps contains infinite Uncurse. Move to the right end and go up, then left. Beware of the Spellbooks coming out, and the Thornweeds on the ground. At next crossroad, take a detour to upper right, and find the Faerie Scroll guarded by three Magic Tomes. Continue to the right while fighting Dhurons and more Spellbooks, and follow the stairs to the bottom. You cannot reach the upper part without double jump yet. The next few rooms before the shop are empty. 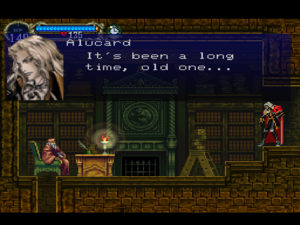 The first shop in Metriodvania series.

(47,15)
Alucard meets the Master Librarian here. After a few talks, you can access his menu. The stuffs are:

If you are playing as Richter or Maria, the Master Librarian will simply face left and refuse to talk with you.
Afterwards
With Jewel of Open, your next stop shall be either Royal Chapel or Underground Caverns.

You will eventually return here with Leap Stone and Form of Mist.

(51,14)
With Leap Stone you can reach the higher ledge, with a Corpseweed. Move to the left and save.
(48,14)
The room is crowded with Dhurons and Flea Armors.
(46,14)
A large room with a few Flea Armors hopping around. You can visit (47,13) now or later for a few handy weapons. After that, go to (44,15) for a boss fight.
(47,13)
While sitting in the cozy chairs may be comfortable, break the fire on the table for a Stone Mask. Push the bookshelf on the right to rotate it, revealing another room with Topaz Circlet and Holy Rod. 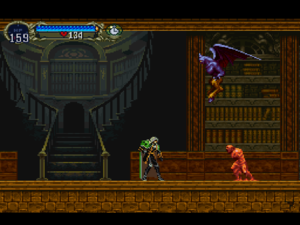 Characteristics
On the ground, he may perform punches, sometimes with a fireball. When flying, he may turn invincible and summon another monster to assist him, or release a downward blast ball. He may summon Ectoplasm, Skeleton or Mudman.
Strategy
If you want a full Enemy List, wait until he summons a Mudman, since this unique monster is not available in anywhere else, and other Lesser Demons in Reverse Castle will only copy themselves. Other than that, the fight is easy, just pull anything handy, including the Holy Rod not far away.

(42,15)
Move further and you can collect Takemitsu, Onyx and Frankfurter before the grate. Pass the grate with mist form and you can finally obtain Soul of Bat. Before leaving this area, there is still one room to visit.
(50,13)
In this room you shall find your first familiar, the Faerie Card, along with a Potion and Antivenom.

You may have noticed that there is a tunnel beneath the chair of Master Librarian. At (47,16) the room below, there is a hole in the ceiling, which is exactly the same tunnel. By performing super jumps in the tunnel, you may collect some extra treasure:

Notice that, it only counts as one jump if Master Librarian lands on the ground of 2nd floor.