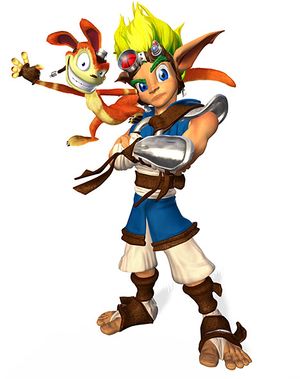 The main characters of the series, Jak and Daxter.

Jak and Daxter is a video game franchise originally developed by Naughty Dog for the PlayStation 2. Currently, five games in the series have been released, with Jak as the primary playable character in all except Daxter for the PSP.

While there was a significant jump in gameplay between the first and subsequent games of the series, and significant deviation with both Jak X: Combat Racing and Daxter, much of the series shares common gaming elements.

The Jak series is primarily a platformer, requiring the player to control Jak or Daxter in jumping puzzles to reach a final goal while avoiding enemy attacks. The controlled character can only take a few hits before he is down, though health can be recovered using Green Eco. Both characters can double-jump to cross large gaps or reach higher platforms. Jak can perform several melee attacks in combination with his jumping skills, and many parts of the games also contain shooting and driving.

Pages in category "Jak and Daxter"

The following 4 pages are in this category, out of 4 total.