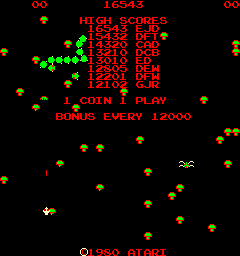 You control the Bug Blaster at the bottom of the screen with the trackball. You must fire up into the mushroom forest, attempting to hit the Centipede. When the Centipede's body is hit, it splits in to two smaller Centipedes. You must destroy every segment of the Centipede in order to advance to the next stage. You must avoid contact with the Centipede, as well as any other insects. The Scorpion poisons mushrooms that drive the Centipedes mad if they touch one.

This bottom cannon, looking somewhat like a snake's head, is you. You can travel the width of the screen and approximately one third of the way up. Each shot that you fire must strike an object or clear the screen before you can fire again. Don't let yourself idle, keep moving the Bug Blaster in order to stay alive and time your shots for the greatest impact.

This elongated insect is a very complex adversary. It winds its way back and forth across the screen from top to bottom. Its path is determined by the maze of mushrooms that randomly fill the screen. The Centipede will drop one level and reverse its direction each time it makes contact with a mushroom or the side of the screen. Each segment of the Centipede that is shot turns into a mushroom. The segment directly behind it becomes a new head. This holds true for a Centipede shot in the middle. It will divide into two independent insects, each with a head. The Centipede will divide and multiply, but do your best to prevent that. Try to attack from the head or the tail and move progressively toward the other end. Destroy every Centipede segment before it hits the bottom and calls reinforcement heads from the sides. The worst position to be in is with segments attacking from both over and under your Bug Blaster.

This pesty bug is crafty, but his abilities are limited. His immediate goal is to attack and kill you. He also eats a few mushrooms now and then, which may provoke the Flea. He can only enter from the sides (about a third of the way up) and can only move up and down, and forward. Only one Spider can occupy the screen at a time, and it can never retreat. Contact with this insect means death to your Bug Blaster. Shooting it gains variable points depending on its distance from your shooter. Don't allow the Spider to interfere with your game. Kill the Spider if it's convenient. If you can't easily kill him, don't fret. Some top scorers can kill the Spider consistently at 900 points. Don't attempt to do this when you're learning the game. Only attack the Spider after all other elements are mastered. The best initial advice is to be aware of the Spider at all times. If he's dangling up and down on your left, stay to the right and concentrate on other elements. Once the Spider exits, however, be careful. A new Spider can enter from either side.

A Flea will only appear if there are less than five Mushrooms in the lower portion (working area) of the screen. His primary function is to replenish the mushrooms you've destroyed at the bottom of the screen. Fleas only appear when less than five mushrooms sit in your working area. That working area is the distance from the bottom of the screen to the height your Bug Blaster can reach. Fleas will keep coming until at least five mushrooms remain in that working area. The Flea always makes a rapid vertical descent, leaving a random number of mushrooms behind it. It takes two shot to kill a Flea. If hit only once, the Flea's rate of descent will become lighting fast. It's easy to get out of a Flea's path. Don't let them distract you.

This venomous creature seems to appear just when you think you're doing well. Her main function is to poison mushrooms. Entering from either side of the screen, the Scorpion takes a straight path across, poisoning every mushroom it touches. This transfiguration of fungi has a frightening effect on the Centipede. If a Centipede hits one of these poisoned mushrooms, it will dive quickly to the bottom. By all means, kill the Scorpion. It's your key to top scores. And the real trick is to kill the Scorpion fast, before it poisons the mushrooms.

It takes four shots to destroy a mushroom. There are two types of mushrooms: ordinary ones that are supplied at the beginning of the game or by the Fleas and appear when a Centipede segment is destroyed; and those that are poisoned by the Scorpion. The first type of mushroom determine the path that the Centipede will take toward the bottom of the screen. You should learn how to take control of that path. The poisoned mushrooms are dangerous. If a Centipede contacts a poisoned mushroom, it dives quickly to the bottom of the screen. The only way to stop its plunge is to kill it by the head. When your Bug Blaster gets hit, you earn an extra 5 points for every partially destroyed and poisoned mushroom as they get restored.