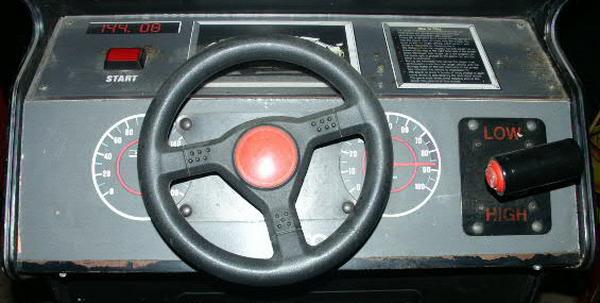 This custom black Porsche, which one type of sitdown cabinet was in the shape of, is driven by the game's two protagonists, Tony Gibson and Raymond Broady (also known as Mr. Driver); the player must help them catch up with various criminals' cars (which shall get indicated by an arrow with the text "CRIMINALS HERE!" appearing over them when they are caught up with) within a minute, after which a flashing red light appears on its roof, and its siren starts to be heard. They must then ram the criminals' cars until they are too damaged to keep going (while avoiding contact with all other vehicles, as they will cause it to spin out or go off the track, which costs time) within another minute - and as mentioned above, the car also has a Turbo Activator which can be used to make it accelerate to an incredible speed a maximum of three times per stage (and it must be used wisely to catch the criminals before time runs out).