The distance between the Porsche and each of the criminals' cars begins at 1024 on every stage, and decreases the closer it gets to them (the proximity of the Porsche to the criminals' cars shall be indicated by the radar display on the screen's right side, with the Porsche being represented by a black dot, and the criminals' cars represented by dots in their respective colours); however, if the Porsche spins out or goes off the track, the distance will increase as the criminals' cars get further away from it again. It can also be difficult to disable the criminals' cars before the time runs out if you expend all of your Turbo Activator uses before you reach them - and if you run out of time, they will crash through the Mexican border as the text "GAME OVER" appears. You may also pass one or more of the subsequent stages' target cars on this stage; however, at this point, they are just like every other non-target car, and ramming into them now will not register against them when you manage to catch up with them on the stages where they have become the targets. 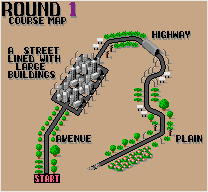 Welcome to the game. Once Gibson and Broady's custom black Porsche has appeared on the screen, you'll have to step on the gas pedal to accelerate it (you shall receive 10 points for every metre travelled), then shift into high gear once it reaches 200 km/h; you shall also have to drive around any other randomly-generated vehicles you may catch up with as they shall cause the Porsche to spin out or go off the track if crashed into (you will also receive a bonus that starts at 200 points and increases by 200 more points for each one you pass, but it will reset if you crash into one). A right-pointing arrow will then appear on the screen as you enter a city and come to a forked junction, and if you choose to turn the way it's pointing, you will crash through a pair of barriers as you enter a desert, with rocks (which will again cause the Porsche to spin out or go off the track if crashed into) and bushes (which can be driven into to uproot and send flying) on both sides of the track - and once you have crashed through three more pairs of barriers at the desert midpoint and end, you'll come to the point where both paths meet as you reenter the city. However, if you choose to turn to the left at the forked junction, you will continue driving through the city, but this area of it is lined with garbage cans (which can, again, be driven into to send flying) on both sides of the track; once you've reached the point where both paths meet, you will have to turn to the left, then turn to the right as you enter a tunnel. Once you have come out of the tunnel, the sky shall darken and you will have to turn to the right as the text "SIGHTING OF TARGET VEHICLE" appears on the screen - and your time will now get extended to 55, 60, 65, or 70 more seconds (depending on how the cabinet has been set), as a red police light appears on top of the Porsche and its siren starts to be heard from the Yamaha YM-2610. You will now have to turn to the left, catch up with the target car (which has the text "CRIMINALS HERE!" and an arrow in its colour above it), and ram it until it is too damaged to keep going (you will receive 10000 points every time you do so); once the target car's damage meter on the left side of the screen has been completely filled it shall burst into flames and stop (the Porsche also stops with it). The text "STAGE 1 COMPLETE!" will then appear on the screen with "OK! You're under arrest on suspicion of first degree murder." and a picture of Gibson and Broady arresting Ralph the Idaho Slasher below it - and you'll then receive a "Clear Bonus" of 100000 points, and a "Time Bonus" of 5000 points for every second you have remaining. The screen shall then fade back into the Taito Monitoring System SP-01A as it adjusts its frequency to 143.72 MHz (and signal to 5.5) and the following text appears letter-by-letter on its black rectangular screen (scrolling up after every line):

This is Nancy at Chase HQ.
We've got an emergency here,
Carlos,
the New York armed robber,
has been spotted a yellow
sports car on the freeway. Over.

A picture of the second target car will also appear on its blue square screen and rotate until its rear faces the monitor while the text is being displayed, and the game will then proceed to the second stage; this stage also has a Special Investigation Department helicopter saying which way Carlos went.