From this stage onwards, the criminals' cars will have a slight speed advantage over Gibson and Broady's Porsche once they have caught up with them, so it is advisable to only expend a use of the Turbo Activator in the first part of the stage when necessary (such as if the Porsche crashes and spins out, because you might not catch up with them before the timer runs out otherwise); if you should expend all three (or five, depending upon how the cabinet is set) of a stage's uses before the damage meter of the criminal's car is almost filled, the timer will almost certainly run out before you have disabled it. The amount of points you shall receive each time you manage to ram into the slightly-faster target car for this stage has also been increased to 30000, and if you're using MAME to play the game, you may wish to use the "Analog Controls" menu to increase the virtual gas pedal's speed and sensitivity. 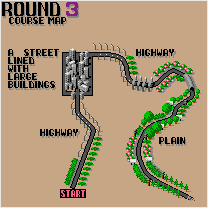 Once Gibson and Broady's Porsche has reappeared on the screen (with an again-replenished amount of Turbo Activator uses which you shall now have to only expend when necessary for the reason described above), you shall have to step on the gas pedal to accelerate it, then shift it into high gear once it reaches 200 km/h; you shall now have to turn to the right, turn to the left and turn to the right again as you come to a forked junction and a left-pointing arrow appears on the screen. If you choose to turn to the left, you'll crash through a pair of barriers as you enter a desert which has rocks (that will again cause the Porsche to spin out or go off the track if crashed into) and bushes (that can again be driven into to uproot and send flying) on both sides of the track - and once you've crashed through another pair of barriers at the desert's end, you shall reenter the city in which you started and come to the point where both paths meet. However, if you chose to turn to the right at the forked junction you'll continue driving through the city; this area of it is also lined with garbage cans on both sides of the track (which can, again, be driven into to send flying). Once you have come to that point where both paths meet, you will have to turn to the right, then turn to the left as you pass under thirty bridges and turn to the right as you drive into a tunnel - and once you have come out of the tunnel, you'll have to turn to the right again as the sky darkens and the text "SIGHTING OF TARGET VEHICLE" appears on the screen (your time will also be extended to 55, 60, 65 or 70 more seconds depending on how the cabinet is set and the red police light will also reappear on top of the Porsche as its siren starts to be heard from the Yamaha YM-2610 for a third time). You shall then have to catch up with the target vehicle (which once again has the text "CRIMINALS HERE!" and an arrow in its colour over it) and ram it until it is too damaged to keep going; once its damage meter on the left side of the screen has been completely filled, it will stop (the Porsche will also once again stop with it). The text "STAGE 3 COMPLETE!" will then appear on the screen, with the text "OK! You're under arrest on suspicion of selling drugs." and a picture of Gibson and Broady arresting the gang of Chicago pushers below it - and you'll then receive a "Clear Bonus" (this time of 300000 points), and a "Time Bonus" of 5000 points for every second you have remaining. The screen shall now fade into the Taito Monitoring System SP-01A as it adjusts its frequency to 144.86 MHz and its signal to 5.5 for what's now the fourth time in the game and the following text will appear letter-by-letter on its black rectangular screen (scrolling up after each line):

This is Nancy at Chase HQ.
We've got an emergency here,
The L.A. kidnapper is speeding
toward the outskirts of town
in a blue two seater. Over.

A picture of the fourth stage's target car will also appear on the blue square screen and rotate anticlockwise until its rear faces out of the monitor, and the game will then proceed to the fourth stage - and this one again sees the Special Investigation Helicopter telling Gibson and Broady which way the L.A. kidnapper went (it is also the last one in which a picture of its target car shall be displayed on the Taito Monitoring System SP-01A's blue square screen before it starts, as the target for the fifth and final stage is reported as unknown, so it only displays a picture of Gibson and Broady's Porsche).