As mentioned on the previous page, the target car for this stage shall have a slight speed advantage over Gibson and Broady's Porsche once they catch up with it, so it is again advisable to only expend a use of the Turbo Activator if it is absolutely necessary (like after a spin-out) before they have done so; the amount of points that you will receive every time you manage to ram into the back of this again-slightly-faster one has also been increased to 40000. 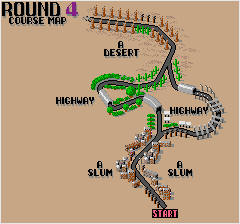 However, if you chose to turn to the right at the forked junction, you shall drive up a ramp and under fifty-six red bridges; you will now have to turn to the left as you drive into a different first tunnel. Once you have come out of this tunnel, you will have to turn to the left again as you come to the point where both paths meet - and regardless of which path you chose, you then have to turn to the left (once again, if you chose the right path, and a right-pointing arrow might also have appeared on the screen instead of the left-pointing one when you were coming to that forked junction earlier) as the sky darkens and the text "SIGHTING OF TARGET VEHICLE" appears on the screen (your time will also be extended to 55, 60, 65 or 70 more seconds, and the red police light will also reappear on top of the Porsche as its siren begins to be heard from the Yamaha YM-2610 for a fourth time). You now have to catch up with the target car (which is yet again indicated by the text "CRIMINALS HERE!" and an arrow in its colour over it), and ram it until it is too damaged to keep going; however, as mentioned on the previous page, it will have a slight speed advantage over the Porsche, and if you have expended all your Turbo Activator uses by this point, it will almost certainly ensure that the timer will run out before you can disable it. But if you manage to completely fill the target car's damage meter on the left side of the screen before that happens, it shall stop (the Porsche will also yet again stop with it) - and the text "STAGE 4 COMPLETE!" will then appear on the screen, with the text of "OK! You're under arrest on suspicion of kidnapping.", and a picture of Gibson and Broady arresting the L.A. kidnapper below it. You will then receive a "Clear Bonus" (this time of 400000 points) and a "Time Bonus" of 5000 points for every second you have remaining; the screen will then fade back to the Taito Monitoring System SP-01A, as it adjusts its frequency to 144.58 MHz and its signal to 5.5 (for a fifth and final time) and the following text appears letter-by-letter on its black rectangular screen (scrolling up after each line):

This is Nancy at Chase HQ.
We've got an emergency here,
the Eastern bloc spy from
Washington is fleeing toward
the suburbs. The target vehicle
is unknown. Over.

A picture of Gibson and Broady's own Porsche will also appear on the blue square screen and rotate until its rear is facing out of the monitor, and the game will then proceed to the fifth stage - however, the dot that represents the target car on its radar display happens to be red, so reveals its colour. When you manage to catch up with it, it will (like all other target cars) get identified by the text "CRIMINALS HERE!" and an arrow in its colour over it.