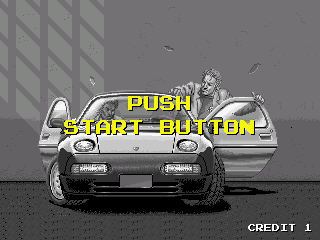 Once you have inserted your coin into the cabinet of Taito Corporation's 1988 racing arcade game, Chase H.Q., it will proceed to the start screen shown above as the text "PUSH START BUTTON" flashes up on it; once you have pressed the Start Button, it will fade into a shot of a Taito Monitoring System SP-01A (with the company name being represented by their old logo which was withdrawn earlier in 1988) as it adjusts its frequency to 144.08 MHz and its signal to 5.5 (the green "BUSY" light below that signal indicator will also turn on). The following text will then appear letter-by-letter on the rectangular black screen below the frequency and signal indicators (scrolling up after each line), as the first stage's target car fades in on the square blue one under it and rotates in an anticlockwise direction until its rear faces the monitor (thus giving the player an idea of what it looks like before they catch up with it):

This is Nancy at Chase HQ.
We've got an emergency here,
Ralph, the Idaho Slasher,
is fleeing toward the suburbs.
The target vehicle is a white
British sports car. Over.

The green "BUSY" light below the signal indicator will then turn off as the red "CALL" one to its left turns on, and the game will proceed to the first stage; the amount of time you shall have to catch up with the criminal's car on each stage, and how much additional time you will receive on doing so, depends on what the arcade operator has set the "Timer Setting" dipswitch setting to (55, 60, 65 or 70 seconds). Therefore, if using MAME to play the game, you may wish to set it to "70 Seconds" to increase your chances of catching the criminals before the timer runs out - and the amount of Turbo Activator uses you will have for each stage also depends on what that arcade operator has set the "Turbos Stocked" dipswitch setting to (3 or 5), so you may also wish to set this option to "5" if you are using MAME, in case the default three uses is not enough for you to catch a specific criminal before the timer runs out.