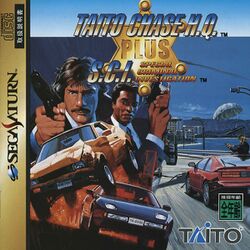 Chase H.Q. Plus S.C.I. is a compilation game which was released by Taito Corporation on the Sega Saturn in 1996 only in Japan; it contains carbon copies of the Japanese versions of the first two titles for their Chase H.Q. series, including the original Japanese text and dialogue.

Chase H.Q. contain their original Japanese text and dialogue, which shall be seen and heard on the Taito Monitoring System at the start of each stage (along with when Gibson & Broady start their car, are contacted by Nancy, ram a criminal's car, and arrest a criminal at the end of a stage) in this game.