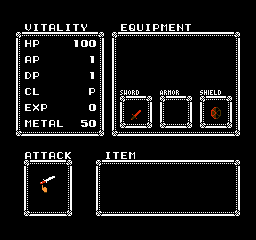 You control Kein throughout the game as he attempts to save the kingdom. Kein is a master swordsman, and he continues to improve throughout the game. Kein must advance from one area of the kingdom to the next, exploring the labyrinth that is found there, defeat the boss that resides there, and collect the treasure he is guarding before advancing on to the next area.

As Kein defeats monsters, he gains experience points. More experience earns you new levels, and new levels improves your statistics. However, each area has a level cap that you can exceed until you leave that area and advance to the next one. Each area allows Kein to advance two levels. He can then earn as many experience points as possible toward the next level, but he will never reach that next level until he reaches a new area. See below for more information about Kein's statistics.

If Kein's HP ever reaches 0, the game will be over. When you press

, all aspects of the game including the stage, your class, your items, and your EXP will remain the same. Only your Metal (money) will be cut in half. If you are sufficiently lost in a labyrinth, you may choose to end the game immediately by pressing

. A password is provided by the sisters in the Inn, however you must chose not to take a nap, but to spend the entire night in order to receive the password.

HP
This is Kein's vitality. It starts out at 100 hit points, and the maximum amount that it can ever reach, regardless of level, is 200. If Kein possesses medicine which can recover HP, he will use it automatically.
AP
This is Kein's offensive power. In addition to rising naturally with Kein's level, better weapons will increase it as well.
DP
This is Kein's defensive power. While you can purchase weapons, you may wish to wait until all available armor is bought first. Kein can be defeated quite quickly if he does not keep this stat high.
CL
This is Kein's class, otherwise known as his level. It starts at Class P, and works its way up to Class A. Each stage will only allow Kein to climb two classes.
EXP
This stands for Experience. Kein will rise to a new Class when he collects 100 EXP. He can collect up to 99 EXP towards the next level beyond the current stage cap.
METAL
This is the currency of the land. Kein can carry up to a maximum of 999 Metal.
EQUIPMENT
Items that you see in this box are used automatically. Most of them are items that you collect after defeating the boss of a labyrinth. Bosses are well hidden, and it takes good map keeping in order to keep track of where you've been and where you're going.
ATTACK
You will eventually be able to press

to choose between a Sword and a Mace in this box. Both weapons can be used while standing, squatting, or jumping, and can be pointed up. Only a Sword can be swung diagonally, while only a Mace can be used to break walls.
ITEM
Press

to choose between the items found in this box and activate them. You can have up to 8 of any item, therefore it's a good idea to keep their number around 7.