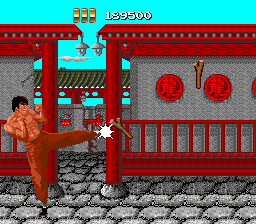 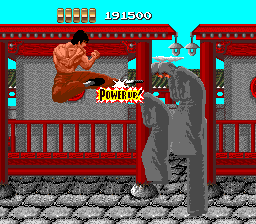 As usual, the stage will start out presenting you with a new challenge. The spears which are thrown across the screen come in pairs. The first two will be high and the next two will be low. There is no benefit to jumping up and attacking the first spears, and in fact, you will most likely fall and get hit by the second pair. Simply jump over the low spears, and prepare to fight the red monk which comes next. After the monk comes two small rocks which fly high through the air. If you jump quickly enough to kick them, the second one will give you a health power-up. After three gray monks and three sticks, a rare appearance of a flying nun-chuck will occur. Simply punch it out of your way. After four more gray monks, another new object will appear, a floating orb. As the orb approaches you, it will slowly rise off the ground. It is too low to punch so jump over it. Two more green monks are followed by two more orbs that you should jump. As a set of monks begin to approach you, three knives will fly through the air. The first one is high and very easy to ignore, but if you jump up and kick it, you will get a health power-up (although you are very likely to land and get hit by one of the monks.) After the monks, two low spears will be thrown which you must jump over. Lastly, you will encounter four orbs which appear high enough for you to stand and punch them. If you hit the first one, you will receive a health power-up. 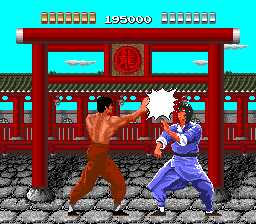 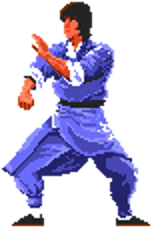 The boss of this stage is a talented martial artist. However, despite his skill, he is susceptible to the same trick that you used against the first boss. Hold

and stand against the left wall. Wait for the boss to approach you and tap

to kick him when he is within range. If you hit him, he will get knocked back. He will then take two steps forward, and you can attack him again. Although he may very well block a few of your kicks, once you find the rhythm, you will be able to successfully hit him every time and knock him out very quickly. 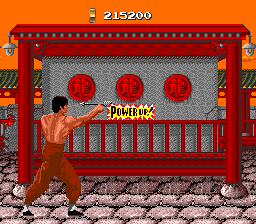 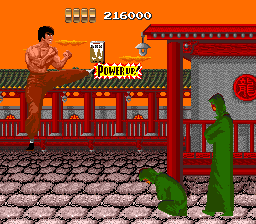 Based on the progression listed above, this may seem like a very short level, and in truth, it is. But you have to keep a sharp eye open to detect which height the arrows will attack from. The first four arrows are low and must be jumped. After one high arrow, there are two more low arrows. The next high arrow should be punched for a health power-up. This is followed by two low arrows, two high arrows, then they will alternate high and low two times, until the remaining arrows fly low. When the last arrow appears, a book will float across the top of the screen. Jump kick it for more health. Finally, three green monks will appear just before the boss. 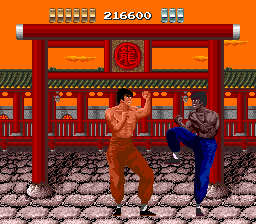 You must now face off with another clone of yourself. Unfortunately, this clone is not as susceptible to the flying jump kick as the previous clone was. While you can use it successfully every now and then, not only will many attempts be blocked, but you will get attacked out of the sky. You'll have to rely on more close-up tactics. Once again, alternating between punches and kicks as you push your opponent across the screen tends to be a successful tactic. Once you have pushed the clone to the right side, back off and repeat the process of the left side. If you are getting hit multiple times, don't forget to attempt to unleash a rage attack against the clone to do tremendous damage in retaliation. 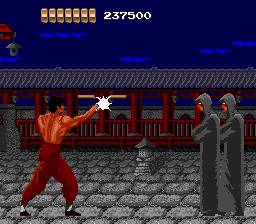 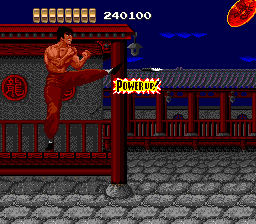 This stage attempts to confuse you with the wide assortment of objects that get thrown at you repeatedly. The stage will begin with three nun-chucks flying through the air, one high followed by two at chest level. Knock them out of the way, along with the four gray monks that follow, and watch out for the two knives that come flying by, one chest level, and one high. Don't jump to hit the high knife, or you will land on the low flying spear that follows. Four sticks will be thrown out, followed by four gray monks. Then two low flying spear will appear which you should leap over. Attack the two green monks that pause and approach you, then prepare to jump up and kick the knife that flies above for a health power-up. Then a disc is thrown near you, followed by an arrow which you should also attempt to jump up and kick for another health power-up. This is followed by another disc, and a series of monks, four gray and four green. After the monks, dodge or strike away four sticks, two of which are thrown high, the second pair low. Before the boss appears, you must avoid two more arrows, which are shot low and should be jumped over. 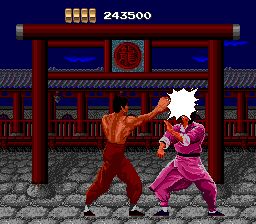 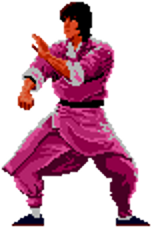 Despite the change in outfit color, this boss is virtually identical to the one you fought at the end of 3-1. He is a little quicker, and will take more advantage of any chance you give him to attack. For this reason, your timing must be exact if you wish to prevent him from attacking you. Other than that, the strategy is the same. Push

while you stand against the left wall, and tap

to kick him when he is within range. Push him back, let him take two steps to approach you, and kick him again. Repeat this until he is defeated, and you will be on your way to the fourth and final area.