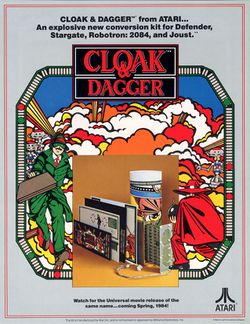 Cloak & Dagger (prototype name: Agent X) is an arcade game that was released by Atari in 1983; it utilises two Motorola M6502 microprocessors (one running at 1 MHz, the other running at 1.25 MHz). The player must use two 8-way joysticks (one is for moving, and the other for firing, when the game's one button is pressed) to take control of the eponymous "Agent X" (who looks somewhat like a green coated Inspector Clouseau as portrayed by Peter Sellers, 1925-1980), who's on a mission to retrieve some stolen plans and destroy the underground bomb factory of an evil scientist called "Dr. Boom" - however, once he has done so, he will have to get back up to the surface while contending with new obstacles and enemies, and each room also has a hole in the centre where the bomb had exploded.