Use the d-pad to direct Bubbles around the screen. You do not directly control which direction to move in however. You direct Bubbles by telling her which claw to stick out and grab the nearest pole to spin around. Push the direction the corresponds to which claw you want her to hold out relative to the direction you are moving in. For example, if Bubbles is moving right and you wish for her to move down, press down on the d-pad to make her stick out her right claw. This will cause Bubbles to grab the nearest pole and spin clockwise around the pole. When Bubbles is facing the new desired direction, let go of the d-pad.

Causes Bubbles to fire a sonic wave in whichever direction she is currently facing.

Pauses the action in the game.

Not used during game play.

You direct Bubbles through the screen by instructing her to hold out her left or right claw to grab on to a peg and spin around. When Bubbles is facing the new desired direction, let go of the d-pad to make Bubbles let go of the peg. Bubbles can emit a sonic wave that can stun enemy urchins. Bubbles loses one life when she comes in to direct contact with an urchin, travels over a black hole without holding on to a peg, or runs out of time. Her goal to clear the stage is to uncover every hidden golden ingot by swimming over them. A green second player Bubbles can play simultaneously with the first player.

Unira is a sea urchin that is out to stop Bubbles. Each stage can contain anywhere from two to five Uniras. They spawn from Black Holes (pictured on the right) and are generally free to travel throughout the stage, although they cannot cross uncovered ingots. They generally seek out the section of the screen where Bubbles is positioned. One touch from a Unira is fatal to Bubbles, but the Uniras are easily stunned by Bubble's sonic waves. Once stunned, they turn from blue to yellow for a brief period of time. During that time, they can be pushed around the screen by Bubbles, and even destroyed if Bubbles smashes a stunned Unira against a wall. They return to their original blue color shortly before becoming unstunned. Bubbles can only safely travel over a Black Hole if she is holding on to a peg when she touches the hole. Failing to grab a peg before touching the Black Hole results in a loss of life. In Vs. Clu Clu Land and the Famicom Disk System version, Uniras are sometimes sucked backwards by underwater currents, and this does allow Uniras to pass through ingots, making them less likely to be trapped by the gold you uncover. 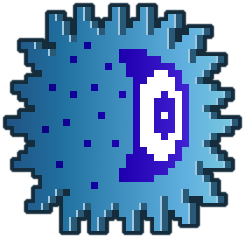 If you've never seen this creature before, then you've only played the original Clu Clu Land on the NES. In the arcade version, Vs. Clu Clu Land, as well as the Famicom Disk System, Boss Unira appears when you have destroyed 7 Uniras. At that time, Boss Unira will spawn from a Black Hole and begin to hunt Bubbles down. Despite it's large size, it is equally susceptible to Bubble's sonic wave as the regular Uniras, and if destroyed, counts as 10 Uniras in point value. After you destroy a Boss Unira, you will not see another Unira until that stages completion. Be aware, however, that this takes a substantial amount of time, and you may not leave yourself with enough time to complete the stage before you lose a life.

Discovering the location of all the golden ingots is the goal of every stage. In order to discover them, you must swim over their position, and they will appear. In general, the layouts for golden ingots fall in to two categories: picture and pattern. If the layout is a picture, the ingots will usually be laid out in a connected fashion. If the layout is a pattern, this is usually a large amount of symmetry between each side of the screen. After you have completed four complete sets of rounds (you will know when this happens when Bubbles returns to her original slower speed), or if you choose the Expert mode on the Famicom Disk System version, the game becomes a little more difficult. When you first travel over the location of an ingot, it appears. But if you travel over it again, it flips over, and looks like the image on the right. All subsequent trips over the same ingot toggle the ingot between being right-side-up and upside-down. Bubbles can not proceed to the next stage until every single ingot is right-side-up.

Bonus Fruit appear sporadically throughout the stages. Some fruit will be immediately visible at the start of a stage, while others need to be uncovered before they can be obtained. Each fruit is worth 800 points, and should only be obtained if it a safe to do so. They are not worth putting Bubbles at risk.

Unlike Bonus Fruit, these items will rarely be immediately visible, and usually need to be discovered by traveling over their location. Each item has a different function. The least valuable item is the money bag, which awards you 1500 points if you claim it. The clock is a special item that temporarily stops time and allows you to travel through the stage unimpeded by Uniras. Be aware, however, that if you run in to a blue Unira even when time is stopped, you will lose a life, so shoot a sonic wave at it first. The flag is an item that awards you with an extra life, so grab it as soon as you can safely reach it.

Barriers are invisible at first, and will appear the first time that Bubbles attempts to swim through them. At this time, the pink barrier will appear and bounce Bubbles back in the opposite direction. They will continue to bounce Bubbles every time she tries to swim through them. This can be dangerous if they snap Bubbles back in the direction of danger, but it can equally as likely turn Bubbles away from trouble. One important note is that while Bubbles can push a stunned Unira trough a barrier, she can not follow it as she will be turned back, leaving the Unira behind.