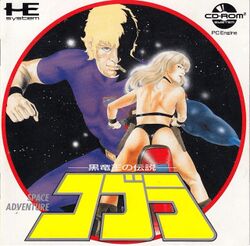 Cobra: Kuroryuuou no Densetsu (コブラ・黒竜王の伝説, Cobra: Kuroryuuou no Densetsu? lit. Cobra: Legend of the Black Dragon King) is an adventure game developed and published by Hudson for the PC Engine Super CD-ROM² in 1989. It is the first video game adaptation of Buichi Terasawa's Cobra, about a dashing space adventurer with a gun built into his left arm who fights off space pirates and various other organizations that wish to do him harm. The Cobra series' most immediately obvious trait is how it tends to feature many scantily-clad women, who either intend to seduce Cobra or kill him. Or both.

This game is based on the story arc in volume 9 of the manga. Cobra is set to steal an ancient ring that is held onboard the Queen Love cruise ship. He succeeds in doing so, but the ship is then attacked by 'Gator' creatures. Amidst the chaos they are then swallowed by an enormous whale-like spaceship called the Jigoru. As Cobra finds a way to escape, he learns more about the civilization that resides within the Jigoru and the Black Dragon King that rules it.

Despite some state-of-the-art sound and voice clips, the game is like many other menu-based adventure games available for home systems of the day. The player must figure out the correct course to solve puzzles and progress with the story, using various commands chosen from a side menu while exploring the world. They can talk to other characters, interact with their surroundings and find and use items to help them proceed. The goal of this game is to hunt down an alien artifact that Cobra wants to steal. All the while he is being followed by a shadowy figure.

Thanks to the direct involvement of Terasawa, the artwork from the manga translates well to the screen. Some scenarios such as onboard the Queen Love have been altered to flesh out the game, but the story remains largely faithful to the source material. The CD storage allowed for some extensive voice acting, with Yasuo Yamada, original voice actor of Lupin III, lending his voice as Cobra in both games. The game would be followed by a sequel, Cobra II: Densetsu no Otoko. The Sega CD version of which was released in the US and Europe as The Space Adventure. It received a Mature rating for its many half-naked female characters.