From your starting position, rise up to the top of the screen and begin flying to the right. Fire your guns and missiles continuously to destroy any enemy helicopters that appear on the screen. Eventually, you will see a soldier on the ground just before a hill. The first hostage will appear at the top of that hill. Descend to get close to him, and the rescue rope will deploy. Let the hostage grab the rope and begin climbing before you proceed to the right. 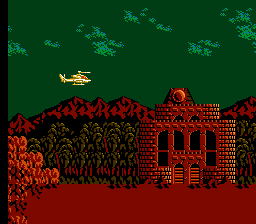 You will fly over a body of water. As you do, more enemy helicopters will appear. Fire continuously to destroy them. When you reach the next hill on the other side of the water, a second hostage will appear. Fly down to rescue him. You will find a building just beyond the hill, with a circle target on the roof. Watching out for any enemy helicopters that appear, shoot the circle until the building collapses, creating a hole in the ground. Fly down through the hole to explore the first underground area. 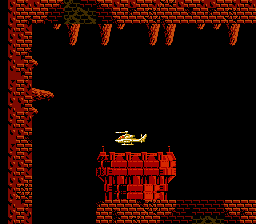 After descending through the hole, fly down on the right to the floor below. Shoot the target on the wall to your left until the wall is destroyed. Then proceed to the left, shooting any soldiers on the ground that you encounter. When the ceiling rises, fly higher up off the floor. Watch out for a rocket launching truck on the floor. Destroy it if you can, but don't go out of your way. To the left of the truck is a platform. Land on this platform to discover a weapon depot and obtain your first two upgrades: Turbo Engines and Dual Guns. When the text stops, hit

to return to the menu screen and activate these two upgrades.

When you are ready, fly down through the hole in the floor on the left. You will discover a building with two cannons and a tank. Destroy all of them before approaching the building. A hostage will appear, followed by two more. After you rescue all three, the tank will reappear. Destroy it again, and then rescue another three hostages. Another tank will appear on the floor. After you destroy it, one more hostage will appear. Rescue it and then rise back up through the ceiling to the level above. Return to way you came to return to the surface.

Rise back up to the top of the screen and fly to the right. Shoot down the helicopters, but you can safely ignore any threats on the ground. When you reach two small structures, a hostage will appear on the ground near the left one. Collect it, but watch out for a soldier shooting at you from the right. 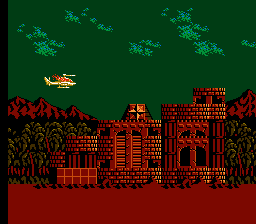 Continue to the right, and you will fly over a tower, as well as a long low building. Beyond the building, you will find three missile launcher hatches. At this time, you should reverse the helicopter so that you are facing left, and fly over the hatches backwards. You will not have to worry about the scrolling slowing you down and putting you at risk of getting hit by the missiles. Once you are over the hatches, turn back around. You will reach a final building and the screen will stop scrolling. The building has a star symbol on the roof. Shoot at it until the building collapses, creating another hole in the ground, and then fly down to explore the second underground area.

Fly down through the hole. You will see a tank next to a platform. This platform is another weapon depot. Land on it to receive another upgrade: Twin Missiles. Activate the upgrade as soon as you can, and then fly to the left. You will encounter a dangerous rocket launching tank. To safely destroy this tank, you should fly a small distance above the floor just high enough for the tank's rockets to pass beneath you, but low enough for your missiles to hit the tank.

When the tank is destroyed, hostages will appear on top of the building on the far left. After you rescue three of them, the tank will reappear on the floor. As you pick up the third hostage get your helicopter in position to fight the tank. You must repeat the sequence of rescuing three hostages and destroying the tank two more times. After you destroy the third tank (not including the first time you encountered it) one final hostage will appear. Rescue this hostage to advance to the next stage.

Note: If you do not advance to the next stage after collecting this final hostage, it means that you missed a hostage somewhere along the way. You will need to exit from this underground base and retrace your steps in an effort to locate any missing hostages.