As usual, fly up to the top of the screen and proceed to the right. Concentrate your fire on enemy helicopters. Bomb ground targets if you can, but don't go out of your way to destroy them. After flying over two tanks, you'll see a small red structure that fires homing missiles at you. You can stop the missiles from appearing if you bomb the roof of the building, although no damage will be visible, the missiles will simply stop. 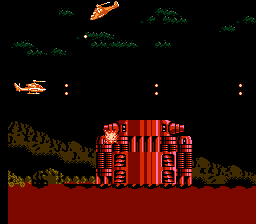 After flying over a roof with a leaf canopy above it, you will find the first hostage. Watch out for the cannon beyond him and collect him. If you check the messages on the menu screen, the hostage will inform you that an underground base is right nearby. Indeed it is, but in order to access it, you must first return to the left and collect another hostage.

Right on the other side of the building with the leaves above the roof is another small red structure with an opening on the left. A hostage will appear from there. Collect him and return to the right. Just beyond where you gathered the first hostage is another building that spawns enemy helicopters from the roof. Shoot or bomb the left gun on the roof to make the building collapse. Then fly down through the hole in the ground.

When you arrive, a tank will flee to the left. Ignore it and focus on the seal on the right side of the floor. Bomb it to destroy it and fly through the hole it creates. Below you will find a tank with a three-way gun. If you don't destroy it after a while, it drives away to the right. 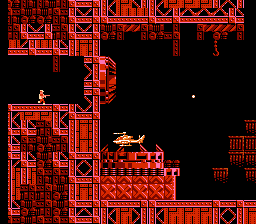 There is a tunnel to the left. Below that is a platform that looks like you might not be able to land on top of, but you can. Do so to receive your next set of upgrades: Hyper Engines, Mines, and the Ladder. The Mines are a more frequent but less powerful version of the Fire bomb, and it suffices against most enemies. Definitely do not engage the Hyper Engines down here. The choice between the Ladder and the Rope is strictly personal preference, so try it out.

Shoot down the cap on the right side of the tunnel, and carefully pilot your helicopter through it. Upon reaching the other side, fly down and shoot or bomb the crates that are between you and the cannon in the lower left corner, then destroy the cannon. Fly up through th gap in the ceiling above.

Fly to the right a bit, and you should see a tank with homing missiles on the ground. Destroy it, and a hostage will appear. But before you collect the hostage, if you fly a bit further to the right, another tank will appear. Be sure to remove this tank once it's vulnerable to attack before you collect any hostages. From here, you must do the usual sequence of collecting three hostages and destroying a tank which reappears, until all of the hostages have been collected. Then retrace your steps through the underground to return to the surface, 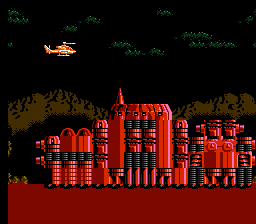 Fly up to the top of the screen and proceed to the right, firing continuously. After a short distance, the screen will stop scrolling temporarily, while the lower right portion fills up with burning lava, presumably from an erupting volcano. Stay near the top and continue to fly forward. Just beyond the lava will be a small lake.

Past the lake, you will reach a large building. When the screen stops scrolling, concentrate your fire on the flat roof until it collapses and reveals a hole in the ground. Fly through it to proceed to the second underground base.

When you arrive, face the left and shoot the large red gate on the left wall until it is destroyed. Then approach the tunnel. As you do, gates will close and then reopen. They only do this once, so after they open, it is safe to pass through. Fly down through the hole in the floor on the left. 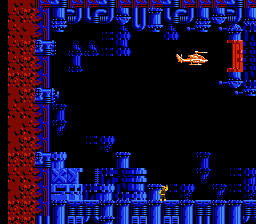 When you arrive in the lower level, you will spot another red hatch on the left wall, only much smaller this time. Destroy it and carefully fly through. On the other side are two cannons and a tank. Remove them all and hostages will begin to appear on the ground. You will also notice a red wall near the top. This is actually another weapons depot that you can capture. If you direct the nose of your helicopter to the red wall, you will receive the following upgrades: Anti Tank Gun and Homing 1.

Proceed to collect all of the hostages, knowing that you will have to stop and kill a tank after every three hostages. Once you have collected the last hostage, you will advance to the next stage.