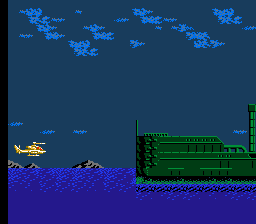 You will be flying over an ocean for a majority of this stage. While a majority of the strategy remains the same (you're safer near the top of the screen), you should be aware that if you are using Mines, the mines you drop will float on the water for a period of time, and stay there until enemy boats hit them, or they self-destruct. If you have Homing 1 missiles, you are better off using them in general.

Fly up and to the right from your starting location. You will be greeted by several enemy planes in the air, and a few boats on the surface of the water. After a short distance, you will see a large aircraft carrier. If you bomb the very front (the hull) of the ship, it will break open and allow you to fly inside. 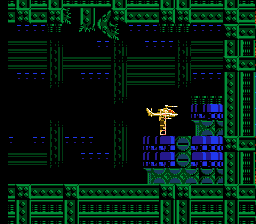 When you arrive, you will be greeted by a tank and a cannon, both of which you can safely ignore. Continue to fly towards the back of the boat, and you will find a tank below a structure. Destroy the tank, and begin to rescue the hostages that appear from the structure. Repeat the process of destroying the tank and rescuing hostages until no more hostages appear. Then turn around and fly out of the boat. 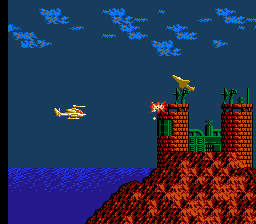 Fly over the top of the boat, and proceed to the island the follows. A small structure there sits on the rock, with a green hatch on the left side. Focus your fire on this hatch until the building collapses, creating a hole in the ground. Fly down through the hole. 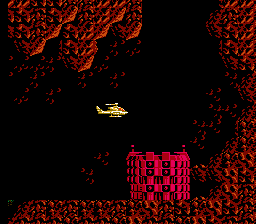 You will be greeted by a soldier and a cannon. Wipe them out before proceeding to the right. A tank will appear before hole in the floor to the right. Drop down the hole, and you will see and platform on the bottom right corner. Land on this platform to receive your next set of upgrades: Rapid Fire and Homing Missiles II. Definitely switch to Homing 2, but you may wish to leave your guns on Dual for the time being.

Proceed to the left, but stay very low to the ground. After you pass a tank, you will fly over a submarine capable of launching four guided missiles into the air. If you stay low enough, you can avoid most of them. Three hostages will appear from the submarine. Collect them, and wait for the missiles to stop. When they do, fly back to the right and escape to the surface. 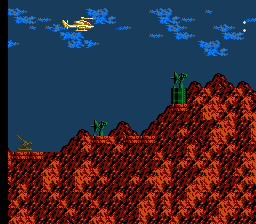 Return to the top of the screen and fly to the right. As jet fights continue to appear, you will fly over a large battleship with fixed cannons that you can't destroy. Fly straight over the battleship and continue until you reach land. You will see radar dishes poking out of the ground. Stop when you see the second dish, which is elevated. Beyond the second dish is an active volcano that spews large and small blobs of lava.

Shoot the second dish until it explodes, creating a hole in the volcano behind it. Descend through the hole to the second underground. 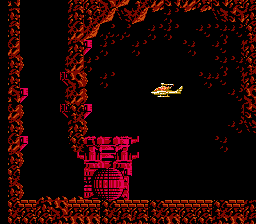 You'll see a red structure blocking your way forward. Land on top of it first in order to receive the next upgrade: Super Armor. After doing so, you will immediately appear in the shaft to the left of the structure, and fly up through the chute in the ceiling to the floor above. A soldier and a cannon will be waiting for you. Destroy them and shoot the red target on the wall in the upper right corner. Then fly directly into the structure beyond the wall to the right. 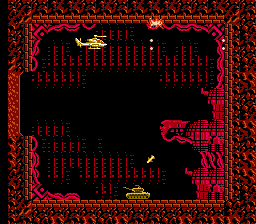 You will arrive in a new room. Immediately remove the tank on the floor, and then fly to the structure on the right. Hostages will begin to appear. As you approach them, you may begin to notice that missiles are launched diagonally across the room from three different corners. After you rescue three hostages, the tank will reappear on the floor, forcing you to abandon your position and remove the tank before you can resume rescuing hostages. In doing so, you must do your best to avoid getting hit by the missiles.

In order to safely remove the tank, you should switch to Homing 1 or Homing 2 missiles, fly to the top of the screen where you are safe, and let the homing missiles remove the tank before flying back down to the ledge a rescuing more hostages. Attempting to fly through the middle of the room puts your helicopter in too much risk.