When you begin this stage, you will start out by flying above the clouds. Fly to the top of the screen, and proceed to the right. Fire continuously as enemy fighter jets appear on the screen. With Dual guns and Homing 2 missiles, you should be able to destroy every plane that appears before they can threaten you. Continue flying until the game takes control of your helicopter, and drops you down below the clouds. 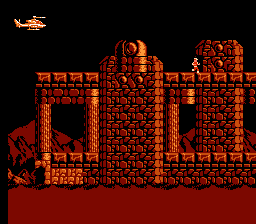 Once you resume control, continue flying to the right (the game allows you to fly back to the left, but there's nothing to find there.) As you fly to the right, you will see blimps hovering in the air. They will attack you by dropping bombs straight down to the ground when you fly beneath them. The lower you are, the safer you are from attack.

Don't stay low, however, since you will encounter a missile silo shortly after the blimp, which fires a rocket into the air. You will be force to fly past another blimp and missile silo before you reach a large structure with an orb on the roof. Shoot the orb until the roof collapses and creates a hole in the ground, but watch out for the grenade-lobbing soldier beyond the orb. Fly down through the hole. 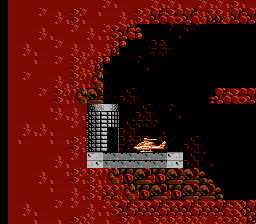 After dropping down, proceed down the right side to the level below. Watch out for the tank on the floor, and fly back up through the hole in the ceiling to the left of where you arrived. Carefully fly back up to the ceiling, and then fly off to the left. Destroy the two cannons that you must fly over, and the tank in front of the structure along the left wall. When the tank is destroy, land on the platform to the right of the structure to receive your final upgrades: 3-Way Guns and Hyper Armour. The switch to Hyper Armour is automatic, and it's not a bad idea to switch to the 3-Way gun.

From the depot, fly to the right and down the hole back to the lower level. As you proceed to the left, you'll fly between a set of ruins on the ceiling that drop pieces down to the fly. Avoid these pieces as they fall, and approach the small building on the left. Destroy the tank and begin rescuing hostages. Repeat this until you rescue the last hostage. After you save the last one, the top portion of the wall will disappear, allowing you to continue to the left. 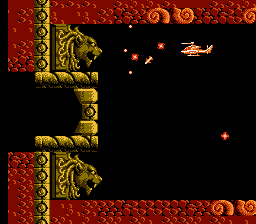 You will arrive in front of a statue with two lion heads. A set of shells in the floor and ceiling disguise guns that fire straight up and straight down respectively. Both lion heads are capable of shooting at you, although they don't fire in combination. Position yourself between the shells, and aim at either lion head until they are destroyed, and the passage opens up. 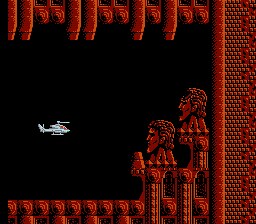 You will then be transported to the enemy headquarters for the final battle. When you arrive, you must fly to the right and pass a series of giant jets that fire flame straight up to the ceiling. The best way to past this without risking any harm to your helicopter, is to press

to turn around and face left, and fly backwards to the right. You will fly over each jet before they have a chance to shoot a fireball up at you.

When you see a set of head statues, stop and turn your helicopter back around. Focus your attack at the top of the first head until they disappear and reveal a hole in the floor. Fly down through the hole. 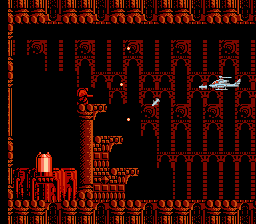 When you arrive, turn around and fly to the left. You will soon see a pagoda that launches bullets up to the ceiling, followed by a rotating bar of flame. Fly over the pagoda, and under the bar, and you will see another pagoda followed by a series of three bars. Time your passage below all of the bars and continue to the left. You will eventually see a cannon perched on top of a structure, and behind it, a machine will move up and down sending lava flying through the screen. Shoot at the cannon until the machine behind it disappears, and then fly down through the hole. 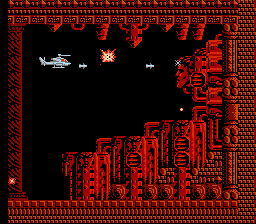 Through the next section, a set of orbs will stretch out and try to attack your helicopter as you fly by. It's import to fly non-stop at a level directly down the middle of the screen in order to avoid getting hit. Enemy helicopters will appear as you fly through this section, so fire constantly. You will soon reach a structure on the far right side with two heads similar to the ones you destroyed on the first level.

These heads will shoot large bolts of energy that are capable of destroying your helicopter with one shot. These bolts will be aimed at your helicopter wherever it is on the screen. Bullets will also fall down from the ceiling. It's too dangerous to get close to the heads in order to shoot them. You are safer by firing from a distance just behind where the bullets fall. If you are using homing missiles, you can fly at a height where the heads can't hit you while the homing missiles make their way to the target. It's a bit slow, but if you're patient enough, the homing missiles will do their job without needing to put yourself at risk. When you destroy the heads, you will complete the game. Congratulations.