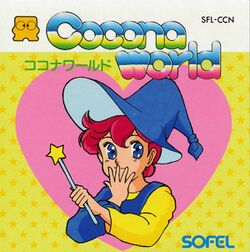 Cocona World (ココナワールド, Cocona Warudo?) is an adventure game developed for the Family Computer Disk System and published by Sofel in 1987. In the game, you control a young witch who wanders throughout various parts of the kingdom. There are many animal inhabitants to interact with, some of which are good and some of which are evil. There are also a number of activities to perform and mini-games to play. Over time, the witch will request that certain activities be performed. If they are not performed within a certain time period, the player receives a penalty. Over time, the character's mood and strength will drop. If both of these are never restored and drop to zero, the game is over. This game was only released in Japan, and has never been translated into English.