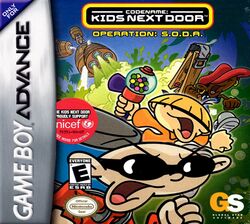 It is a dark time for kids worldwide! With the recent passing of the Soda Control Act, the drinking age of Soda has been raised to 13 years and older. The Kids Next Door have refused to recognize this dastardly attempt at prohibiting children from drinking their favorite beverage, and have taken it upon themselves to run a secret operation providing soda to any kid in the world who wants it... no questions asked.