Combat Arms is quite a straightforward game. Anyone that you can kill, you should kill! Otherwise they will kill you, because they should too. Whoever doesn't do the better shooting dies. This is the general gist of Combat Arms.

Combat Arms is played as a series of separate games, or "matches". Before you will get into a match though, there are several things to do. After downloading, installing, starting, and logging into Combat Arms, you will have to create your character for that account.

There are six character skins to choose from - four males and two females. Although this is generally not considered in character selection, females have a slight advantage because they are noticeably smaller (less likely to be hit) and are unaffected by "nutshot"instantaneous kills. There is no difference between them besides the appearance. After that, you will have to choose a name. Press the button next to the name form to check if the name you choose is available, if not, you will have to use another one. Your name can not contain profanity or attempt to impersonate a GM.

After you create your character, you can not delete it. That character will forever be the only one for that account. You can change your gender, character, and name through the Black Market. However, this uses real life money, and is recommended that you be satisfied with your choice before confirming. 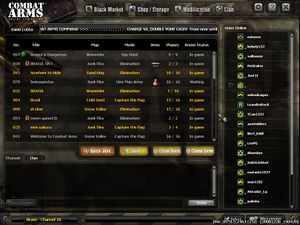 This is the lobby of Bravo Server Channel 10. There is also a list of all players in the lobby to the right, and a chat box at the bottom.

After you create your character, you will be taken to the Server Selection. There are many servers to choose from, but some have restrictions. Some servers are reserved for less experienced players, some for more experienced players, and some for clan battles. The servers higher up on the list tend to have more people, and therefore more lag.

Once you select a server, you will see the Channel Selection. You can choose any of them, but once again, the channels highest up on the list (Channel 1 especially) will have the most people.

When you select a channel, you are taken to the Lobby. This is where you select a game room. The game rooms are listed with the room number, room name, game mode and map being used, maximum number of players, and any weapon restrictions. This lets you scan all the game rooms listed very quickly to search for one that you like. You can not enter a game room that is full or in the final rounds of the game.

Other than joining a game room, you can also create your own game room for others to join. 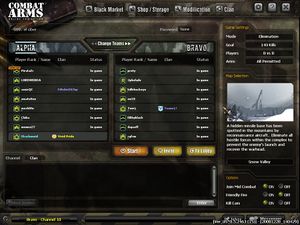 This game of 140 Kill Elimination in Snow Valley has already started. Notice that the room is full.

When people in the game room are ready to start the game, they should press the orange Ready button. The room master, who is the person that created the game room, should press his orange Start button to begin the game. The game cannot be started if there is nobody Ready. The game master also sets all the rules. The parameters that can be set include 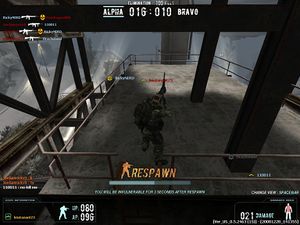 This sniper's location is revealed by the Kill Cam to everybody he kills. 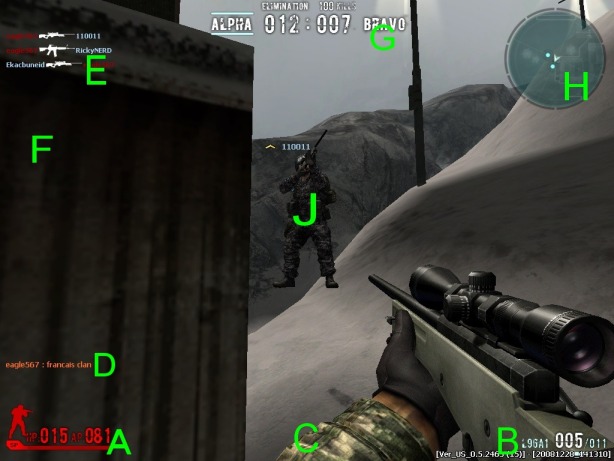 Once the game is started, you will see a loading screen. After the game has loaded, your screen will look somewhat like above.

The multiple kill streaks are based on time. Getting killed will end your streak. Unbelievables and above are ridiculously hard to get and almost always a result of hacking, extreme luck or extreme skill (e.g. one enemy at a time trickling out of a spawn area, throwing a grenade into a large group of players, coming up behind a group of enemies etc.). 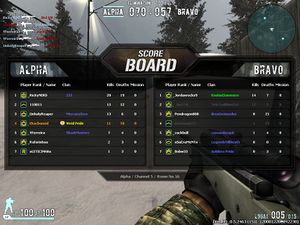 Press Tab at anytime to view the scoreboard.

At any time during a game, you can press Tab to open up the Scoreboard. It will show everyone's name, rank, kills, deaths, and mission points (if applicable). Be sure to not stare at the scoreboard too long because it blocks your screen, and an enemy could shoot you. 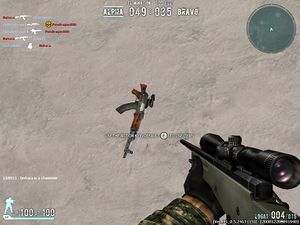 This AK47 has been dropped on the ground.

Also, whenever anyone dies, their primary weapon will be dropped on the ground. To take it, aim your crosshair at it and press E. The gun you originally had will be replaced by the dead person's gun. You can not have both. When you die, your original gun will return. If you want to pick up a dead person's weapon, be sure to do it quick, because enemies will shoot you if they see you staring at the ground for too long.

When the goal for the game is met, everybody is rewarded with GP (Gear Points) with which they can use to rent guns and equipment, and EXP which is accumulated to rank up. The amount of GP and EXP awarded are based on your performance in the game. Having scored many kills will increase you reward, while dying many times will decrease it. Scoring mission points often rewards the most experience. For example, in a game of Capture the Flag (see Game Modes), a person that killed 10, died 12, and scored 3 flags would probably receive more EXP and GP than a person who killed 30, died 12, and scored no flags. There are no "negative rewards" or subtractions of EXP or GP for performing poorly in a game. The only way to lose GP is to spend it, and there is no way to lose EXP apart from getting demoted by GMs.

After concluding a game, the same game room can start another game with or without different rules, or its members can go find another game room.

At any time during any game, a person can press Esc and opt to drop out of the game. They will not be awarded any EXP or GP for that game. People will often forfeit if they have to do something else in real life, if they are doing poorly in that game, or if the game room contains a hacker.

If every single person on a team forfeits, the other side automatically wins the game. Besides missing out on GP and EXP, however, there are absolutely no negative consequences for forfeiting. However, forfeits are recorded on your player stats and any kills and deaths accumulated during a match is still recorded. 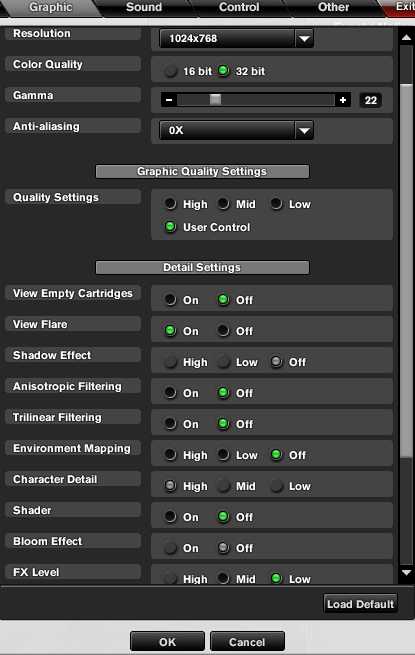 You can change some settings in your game, including graphics, sound, controls, and other.