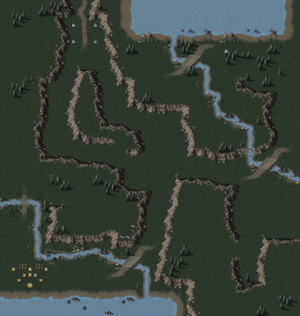 "Fish in a barrel". You're given a small attack force, but the vehicles alone are more than a match for the convoy that wants to speed through here.

The sole objective is to destroy all enemy units. The enemies won't leave the map, but you will have to hunt down those that break through.

Head to the right with the mammoth tank, up to the bridge. You may advance him until you barely see the NOD artillery, which won't attack unless fired upon (or activated by moving further). You can optionally flank the artillery by moving other units to the north, but this is not required.

If you want to make an early kill, you can move a few tanks to the far north-west corner of the map, and destroy two artillery units. This is not required, but it slows down the enemy reinforcement rate (see below).

The convoy starts to move once you move one unit down the valley. Other parts of the convoy arrive when the enemy reaches certain checkpoints in the north and west approach. Although you could minimize the number of enemies by pressing the attack against this approach, this is impractical due to the reinforcement pattern (which includes stealth tanks.)

The best position is right in the center, as all units need to pass through there whether they approach from the north or west. The mammoth tank can take point, with the tanks and rocket launchers providing support.

The convoy itself starts with four artillery units, starting at the northern road, and splitting into two passages. Reinforcements arrive as the convoy progresses, and can be stopped by rapid kills:

Stealth tanks will also try to slip past. They appear under the following conditions, but are guaranteed to appear:

When the convoy is eliminated, send a tank to the north east to find the last unit (make sure you have units behind to intercept stealth tanks). Save the game before destroying the last stealth tank.