Kane informs you that GDI is now field-testing the Ion Cannon. He also learns that the security codes are also found in a communication center of a nearby GDI base. Your mission is to capture it.

There is one layout for this map. 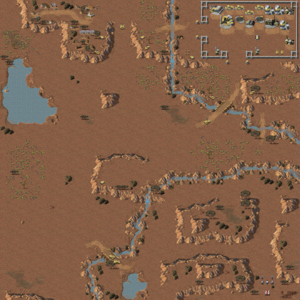 You start with a few vehicles escorting an MCV, and the local area isn't suitable for building your base. Instead, you need to head west. When you see the bridge, there are two mammoth tanks blocking your way. Ideally, you want to have one of your units (preferably a Nod Buggy) to distract the mammoth tanks, while your more dangerous units can attack without worry.

Attacks come from the north. The attacks are mostly infantry, although the enemy may sometimes send a few vehicles to support the attack. The enemy may also send a loaded APC, which includes a commando. Your unit builds should therefore be able to quickly respond to infantry incursions.

There are two scripted ion cannon strikes. The first strike occurs once you destroy a specific mammoth tank (the one initially guarding the passage leading north. The second occurs when you cross the river leading to the GDI base, either by the ford, or by the bridge.

There are two entrances to the GDI base. The south entrance is covered by two guard towers and two advanced guard towers, and that requires significant fire power to pierce.

It is better to attack from the west entrance, which is initially guarded by units rather than stronger defenses. The attack force should include units that fire missiles (stealth tanks, recon bikes, or rocket infantry), as the enemy will use two orcas to defend the base. Destroy the guard towers first. You may choose to capture or destroy the construction yard, but destroying it reveals a crate that you want to use for the final mission.

With the guard towers and orcas down, you can optionally use a stealth tank to destroy the north wall. When destroyed, you can easily squeeze an engineer behind the buildings to capture anything of interest.

This mission will be complete once you capture the advanced communication center in the north-east corner. Before you do, you may want to save the game in case you want to harvest additional tiberium to increase the carryover bonus.