GDI enters Greece in order to rescue their agent Delphi. To do so, they will send a small force onto a fortified beach head. 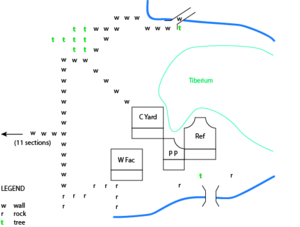 Optimum setup of the base. You must complete the wall-in before the Weapons Factory. No other buildings are built until space is cleared in the Tiberium patch.

With your small quantity of forces, run past the defenses and to the open area above and right. Move the MCV right until you see a tiberium patch, and deploy the MCV there. Build your base and prepare for incoming attacks. By the time you deploy, there is already a light tank chasing the MCV.

Of particular note, the enemy attack waves tend to frequently include flamethrowers. As such, your initial forces will not hold out for very long. Additionally, there are two flame tanks on the map (one to the left of the starting turrets, and one on the bridge north of the tiberium.

The enemy base is well fortified from attacks, but has a weakness.

With medium tanks, you can place them just south of the cliff face, and have them automatically attack the southern SAM sites. While the last SAM site is further away, it is enough to allow you to make orca attacks on any visible power plant. An air assault on this last SAM will require at least 5 orcas, and destroying it (along with the other three) will provide you with air strikes.

The eastern base is the weakest. You can exploit the weakness by ordering your orcas to land in the area east of the base to gradually push away the shroud. Pushing away the shroud should eventually reveal the location of their MCV, which you can destroy with your orcas. Destroying the MCV will prevent NOD from rebuilding any destroyed buildings, allowing you to destroy the six power plants (thus disabling the obelisk.)

If you want to assault the base by a land attack, this will be expensive unless you properly prepare your army. Before charging the base, destroy the southern turret, and clear out as much of the concrete wall to give your units room to maneuver. You can now charge the base, either taking out the turret, or by moving your units to the gap past the southern concrete wall.

To rescue Delphi, you simply need to have one ground unit move past the concrete wall east of the Nod base. While not a mission objective to destroy the enemy base, it's still a major obstacle.

After heading east of the base, a helicopter will arrive, allowing you to evacuate Delphi.