For the third mission, General Sheppard mentions that you're needed for work in Jelgava, Latvia to eliminate the SAM sites and allow air-support in the region. He promises a briefing about the Brotherhood of Nod and tiberium, which will be provided at the start of the next mission. 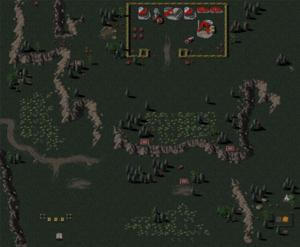 Map of the region

You start at the south-west corner of the area, with an MCV, three Humm-Vees, and 4 minigunners with 4 grenadiers. Build your base as normal - power plant, refinery, barracks. You may also create a communication center, which allows you get an overview of the map. You can optionally build a second refinery to speed up the collection process, but this is not required.

Your first objective is to locate four SAM sites. The first is located to the east, and may be attacked as soon as there is a quiet period from enemy attacks. There are a few enemies guarding the site, but your infantry should be able to destroy it without problem.

Two more SAM Sites are on the cliff that is north-east of the base. Grenadiers and Humm-Vees at the base of the cliff are within firing range, and can destroy the SAM site without approaching the base.

The fourth and final SAM site is reached by heading through left path heading to the enemy base, and by following the left rock formation. This SAM site is easily destroyed without difficulty. Once the last site falls, you can call Air strikes.

The enemy base is protected by infantry, and anti-tank turrets. The turrets aren't strong against infantry, and can fall easily to ground attack. When you enter the base, use the air strike against solders clustering around the Hand of Nod.

You can capture enemy buildings if desired. Train an engineer, and command it to capture the Hand of Nod, which you can use to create more engineers to capture other buildings.

There are groups that will be automatically formed from available units. Unless otherwise noted, they will approach and attack your base:

Other groups of note: