GDI forces have captured NOD's Technology center, including plans for a stealth tank.

There are two layouts for this map. The left arrow leads to Nambia, and the right arrow leads to Mozambique. In both cases, you are dealing with a split force, and must complete both sections. It is strongly recommended to save the game when you approach your captured base, and again once you complete the southern section.

Resources stockpiled in this mission carries over to the next mission. 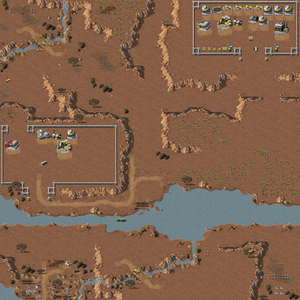 The norht-west forces are interecepted by two grenadiers, and a humvee. The commando can take out the infantry, while the rocket soldiers should target the vehicle. Once you can cross the bridge, continue to the southeast and turn south at the four-way intersection. When you see the base, you can knock down the guard tower with your rocket infantry before capturing the refinery (with the harvester docked.) You can harvest tiberium safely from the single tree.

In the south-east, advance your rocket infantry first to intercept the medium tank. Have the minigunners and artillery on standby, as there are four solders in-range. When they are defeated, continue to the bridge to defeat the mammoth tank. Cross the bridge, and demolish the church for the crate.

The enemy base only has one entrance, protected by two guard towers and an advanced guard tower. If you are able to sneak units to the left of the guard tower (with at least one unit with rockets), you can break through the western concrete wall for quick access to the MCV. Otherwise, you have to restort to destroying the harvester as it collects, or build an extra large force for a frontal attack. 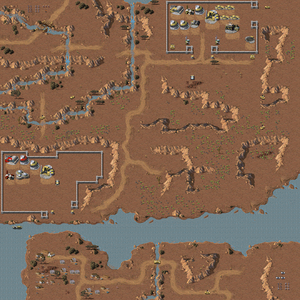 The north-west force has six riflemen, six rocket soldiers, three engineers and one commando. In this case, you have a relativly safe path to your base, where you head right until you cross the ford, turn tot he south, and continue to the end. When you reach the base, you will see two guard towers blocking access - attack them at maximum range with your rocket infantry. While you chip away at the tower, switch to the southern force.

Your south force has six minigunners, six rocket soldiers, and three artillery. Send the minigunners first to eliminate the infantry, but keep the rocket soldiers close. Follow the path to the south, engage the tank. When you continue further left, it finishes with a mammoth tank. Spread your solders before attacking the mammoth tank. When all enemies are eliminates, press into the village and destroy the church for the money crate.

By the time you cleared the south section, you should now have access to your own base. Capture the refinery when the harvester docks, and build your base. The enemy has an initial attack of an APC with three engineers and two grenadiers, and will mostly engage with infantry, with the occasional humvee and medium tank. If the mission lasts long enough, the enemy may also attempt to attack with one of the mammoth tanks.

The enemy base has two entrances you can use. The first involves breaking through the western concrete wall with stealth tanks, and using the opening to capture the construction yard and destroy one of the power plants, which disables the advanced guard towers for a full frontal attack. The second entrance follows the eastern-edge of the map, and is initially guarded by one humvee, and grants access to the tiberium silos and factory.

[Go to top]← Angola or Tanzania | Namibia or Mozambique | Botswana →