This is the final campaign mission, where NOD assaults the last base in South Africa. Here, the Temple of NOD will be built.

There are three variations of this mission, depending on which arrow you choose.

In addition, you have access to a one-time superweapon if you collected three specific crates on previous missions. If you missed one of these creates, you won't be able to use the nuclear strike. If you did, the strike can eliminate a frontline defense that is otherwise interfering with you, or used as a lead-in or speed up to destory a specific section of the base. Likely targets include groups of advanced guard towers, specifically those that block the only way forward.

All three missions have your forces on the opposite side of the river. As such, any vehicles built there will not be useful in the long term, and should be sold when no longer in use. You may also need to watch over your harvesters, as they may sometimes try to reach the wrong refinery. 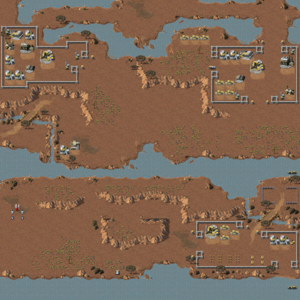 You start with an MCV escorted by two light tanks and two Nod Buggies. There are no airstrikes or ion cannon strikes in this version.

You should move the MCV slightly south, as one of the two gunboats can destroy your construction yard if you deploy it at the starting location. It is also possible to decoy one of the gunboats, by tricking it into attacking one of your units, before moving it out of range. As long as the decoy remains safe, the gunboat will remain harmless.

Your base will receive multiple attacks, mostly from rifle infantry and grenadiers. There will also be a humvee included in some attacks, as such your initial forces should focus on anti-infantry if possible. In this case, the enemy only has a limited number of forces, and they will not be rebuilt.

As always, attacking the guard posts should be done at maximum range. This requires moving the units to maximum firing range before ordering the attack. When you assault the base, remaining infantry will attack, as well as one medium tank. Until you are ready, prevent your units from being adjacent to the northern guard posts, as that will activate AI production.

Across the river, there are two GDI bases, both of which have a construction yard, barracks, and weapons factory.

The northeast base has a frontline of two guard towers, and backed by two advanced guard towers. The back entrance has two guard towers. However, there is a wide opening on the western entrance. If you can transport at least one engineer to the west of the base, you can send him north of the tiberium field and capture one of the three silos. From there, you can build some defenses for a quick way to eliminate two of the power plants, or otherwise keep close pressure to prevent tiberium harvesting.

The northwest base has a frontline defense of two guard towers, backed by two advanced guard towers. Aside from that frontal approach, you can attack the base from the north east (either by sneaking units across, or by cracking the eastern base first), which gives closer access to one advanced power plant, and the construction yard. In addition, you could build a sandbag wall to the northwest, right up against the cliff and build an Obelisk of Light in the corner to eliminate one of the power plants. 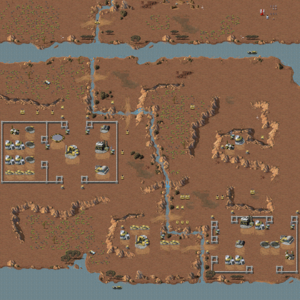 You start with a tank, plenty of infantry. Also, one gunboat would be pressuring your initial base. There are periodic airstrikes and ion cannon strikes on this map, which may be disabled by destroying the appropriate communications center.

Enemy forces in the north include a medium tank. There are also chinooks that will drop off infantry to your base, one of which is to the far left (to draw away your own forces), and the other right next to the starting area. Simply hold out. It is possible to capture one of the chinooks with an engineer. Also, the south-west corner of the tiberium field will attract the attention of an orca, thus you will want to have some anti-air available when it approaches.

There are four sections of interest. First is the outpost in the east edge of the map. Destroying the communication center will stop the air strikes.

In the south edge, there's a refinery and four silos. You will have to fight through enemy units first, but once you get through them, there's a few silos for the taking. The safest route is likely a ford east of the western base, which only requires fighting through three medium tanks and squeezing past an advanced guard tower. Alternatively, you can clear out the units near the south-east base.

The western base has orcas, and therefore requires anti-air units to even approach the base (e.g. Recon bikes or stealth tanks). It is most vulnerable to attacks from the south-west, where there is only a concrete wall protecting the advanced power plants and silos.

The southeast base is the most fortified. Of the three approaches, the western approach may be the most vulnerable, but it's still covered by an advanced guard tower. The west approach also gives easy access to two advanced power plants. 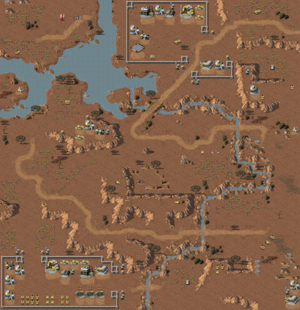 There are frequent airstrikes, but no ion cannon strikes. Because of an incorrect trigger in the map, these airstrikes will never stop.

You'll be quickly attacked by a medium tank, along with five infantry. Your rocket soldiers can easily defeat the tank, and your buggy can take care of the infantry. Soon after you start building your base, a chinook will arrive and drop a friendly commando near a church. Demolish the church and collect the crate for some money.

GDI will have a chinook land to the west of your base. Be sure to capture it with an engineer if you want to transfer your infantry to the south.

After some time, an MCV will arrive to the south of the church. While not an ideal position, it is at least near some resources that you can harvest.

There is a base in the north-east. While the primary entrance to the southwest is well guarded, the eastern entrance has an isolated advanced guard tower. It also has a place where you can land a chinook to deploy infantry behind, and either capture or destroy buildings as desired.

The south-west base has both entrances defended, along with one advanced guard tower within the base, and also requires anti-aircraft units. The west side of this base has three advanced power plants, while the eastern end has a construction yard. At best, you may be able to place an artillery unit over the cliff overlooking the base, and take out a few silos.

In the ending of the campaign, you will watch Nod hackers breaking into GDI's Orbital Defense Matrix. Kane gives you the choice to decide which target to give the best means to reveal GDI's treachery. You can pick one of the White House, Eiffel Tower, the British Houses of Parliment, and Brandenburg Gate.

Whichever option you choose, the leader of the associated country will always be safe in a different city. However, one of the three