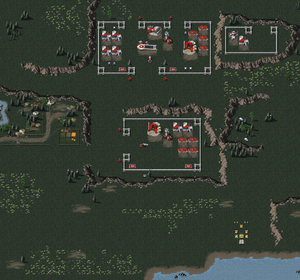 Delphi's info decoded and Kane has been found. He is overseeing experiments at a Bio-research facility in this area. Destroy facility while we have him cornered. Build an Advanced Communications center to access the new Ion Cannon. It will greatly assist you in your objective.

GDI is going for a quick kill to defeat Kane, with the last location known as the bio-research facility. The facility is on a plateau and protected by NOD's main base.

When the mission begins, you start at the bottom-right corner of the map, with one mammoth tank, two medium tanks, two rocket launchers, a hum-vee, and infantry. These units are enough to hold back the initial assault waves.

Build your base as normal, either at the starting location, or to the west between the tiberium fields. To get the economy rolling, build two refineries before anything else. There's plenty of tiberium to the west, so there's no worry about running out for the mission. Secondary buildings should begin with Barracks, and a Repair Facility.

You will most likely be swarmed by units shortly after reaching the first tiberium patch. Surviving the attack is the most difficult part of the stage.

As the only objective is to destroy the bio research facility, you can focus directly on that objective. First, send a mammoth tank (with an escort) to the north of the starting area to try to map out the plateau. From here, there are two possible choices to find the bio facility's location:

If you have an ion cannon, attack the biofacility with land or air units, then flatten it.

Those preferring normal play will need to attack the forward base first. The two SAM sites at the south of the base can be destroyed by direct fire from tanks, while the two turrets on the west edge of the base require three helipads. Send in the engineers, and capture the refinery when the harvester returns with its load, and likewise try to claim the tiberium silos.

The main nod base is protected by two turrets, two SAM sites, and two obelisks of light. This is a strong defense against direct ground assaults. These defenses are backed up by five advanced power stations, plus two more in the forward base. One power station is next to the bio-facility, with the other four on the western edge of the base.

Moving to the west of the base may trigger additional enemies, but this puts the four buildings within firing range of artillery. Destroying at least three of these power plants is enough to cut power to the obelisks, and give room to charge into the base. To prevent rebuilding, make sure your attack force has engineers to capture the MCV at the north end of the base, and the airfield just north of the obelisks.

You can also break through the east side of the base, near the resource area, as that area is not covered by obelisks. You can likewise capture the enemy MCV to prevent rebuilding.

Again, once the base is removed, you should be able to destroy the objective on the plateau to the east.