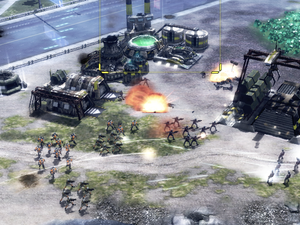 Rescue the base quickly.

The mission starts out with a bang - or several, to be exact. A GDI battleship launches a missile against the attacking Scorpion tanks to the north while your troops disembark from a hovercraft. You have three riflemen, a few grenadiers, and a missile squad. Of the three, the grenadiers and the riflemen are the most important, at least for now. 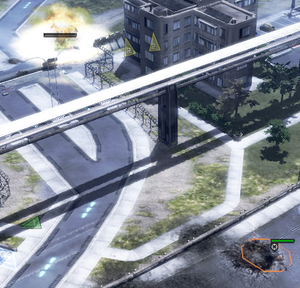 Snipers can bombard base defences from afar.

A garrison to the north, when cleared, yields a pair of snipers. These units are extremely powerful against infantry, and work best in a garrison on this map. Start the mission by sending your force around to the three indicated areas to rescue the snipers.

Build anti-infantry units for defence; APCs, riflemen, and grenadiers all work wonders against infantry. You'll encounter a second wave of enemy infantry about a minute after the mission starts, so get the snipers to safety (they will be shot to pieces by militants if you make them stay; or put them in an APC) and have your more expendable riflemen and grenadiers to eliminate the infantry waves. 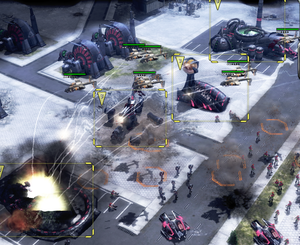 Once you have the airfields, your Orcas can easily end the mission for you. Just keep them away from Raider buggies, Attack Bikes, and most importantly, missile squads.

Build some pitbulls for use against the shredder turrets to the north. Don't send any Engineers or any units anywhere until you've cleared the shredders. When the garrisons are cleared and when the shredder turrets are done, take the extra refinery with an engineer. You shouldn't need to defend it, but keep some APCs nearby in the event some Venoms show up. 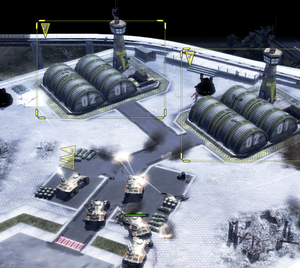 Missile APCs will be your big muscle most of the time.

Once the enemy attack waves are over and you've secured two Tib fields to yourself, proceed to create large waves of rocket infantry, rocket APCs, and riflemen. Bring a grenadier or two in an APC and have them deal with any garrisons to the north. March your overwhelming force to the airfields and have them blow all enemy units up to secure a landing pad for a squad of Orcas.

You then receive a new objective - to destroy the Nod base in the northwest corner. Your Orcas can handle this almost single-handedly; just ensure you destroy any attack bikes or raider buggies, and have them return to base if they take too much damage. If there are no anti-air defences up, have your Orcas target the Scorpion tanks and any unit-producing buildings. Alternatively you can simply have your Orcas use their rockets on the crane, war factory, and the hand to end the mission in short order. You don't need to destroy the power plants in the back.