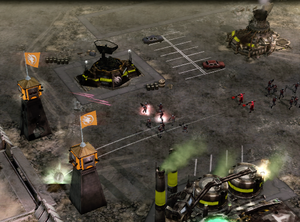 These militants don't stand a chance against Heroic riflemen.
Veterancy
Heroic units - denoted with a single large symbol - not only cause a lot more damage than their standard counterparts, but also heal themselves. The symbol denoting heroic units changes from faction to faction.

A pair of V-35s will fly in to drop off your first units while Kirce James fills you in on the situation: It appears the Brotherhood of Nod has set up camp near an abandoned GDI base to the east. Have your two heroic rifle squads move in that direction to encounter a pair of Nod rifle militants. They are absolutely no match for your heroic riflemen, so go ahead and defeat them to continue.

If you want to play it rough, have your heroic riflemen garrison in either or both of the guard towers. Your riflemen won't even have to heal themselves afterward. 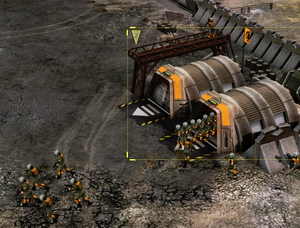 After you're done with the militants, an MCV will roll in from the south and deploy automatically into a Construction Yard. You will then be ordered to put down a barracks and train three more riflemen. The barracks can be put down anywhere, but be advised that an enemy attack will (eventually) come from the east. 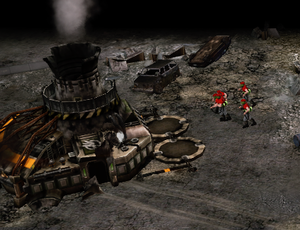 Once the barracks is down, queue up three riflemen. Once they're trained, the mission continues.

A group of Nod Fanatics then charges and destroys your power plant, bringing your base to low power. You are then allowed to construct a replacement power plant. Place it anywhere - preferably in the west - to continue. Be aware that being on low power means that your base defences go offline, units are produced slower, and that your minimap goes down. Be aware, for future reference, that cutting the power on a base by destroying power plants is often a precursor to attack.

While your power plant is built, you can bring the rest of your base online by clicking on the lightning bolt icon at the top of the screen and then on your command post to remove it from the power grid. This prevents the command post from functioning, but it reactivates your minimap and allows the power plant to be built faster. 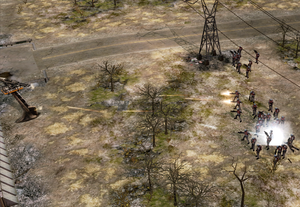 Nod gets a surprise they won't soon forget.

Nod has noticed your presence now, and sends a tiny force to attempt to destroy your base. In addition to using your five riflemen - two of which are heroic - you can build and deploy a watchtower base defence from the support structures tab. It is the shield icon directly below the minimap.

Pop the watch tower base defence right in front of the attacking enemy forces to give Nod a surprise they won't soon forget. Once the attack is over, you can repair the tower in the same manner you repaired the command post earlier if you feel up to it. You should take little to no damage from this Nod attack. 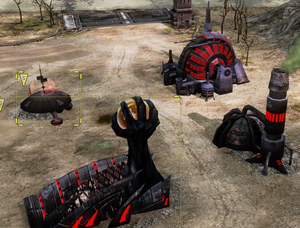 Destroy this tiny outpost to move on. Ensure, however, that one of the easternmost buildings survives.

Once the enemy is done attacking, you can launch a counterattack against the Nod outpost. The base is absolutely tiny, but to assist you in destroying the outpost, a V-35 appears to drop off missile squads. You will find missile squads to be much more effective against structures than riflemen.

At the same time you gain your first bonus objective - build a second infantry queue - that is, build another barracks. Build one and put it down.

Once you have a small squad of approximately three or four missile squads, send them alongside your riflemen to the Nod outpost. Target the Hand of Nod to stem the tide of enemy infantry, then target the outpost. Leave either the Tiberium Silo or the Power Plant intact. 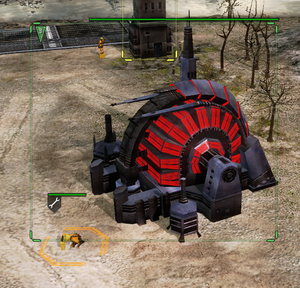 Repair the bridge and capture the Nod buildings to move on. 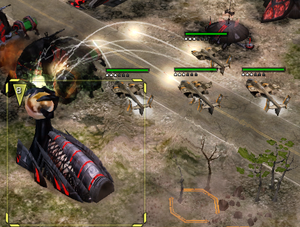 Orcas can cause havoc in the Nod base - at least for now.

You will now receive your first two engineers, again by airmail. Order one of them into either the Tib Silo or the Power plant, and have the other enter the hut next to the bridge to fix it up and allow your forces to proceed north. Sell the captured Nod building to fulfill yet another bonus objective.

At this point you'll receive another bonus objective - build a Tiberium silo. You'll find it under the defensive structures tab. Build it and put it down to fulfill its requirements.

Selling the captured Nod building should gain you access to a Nod militant squad. Send it over to the enemy vehicles on the east side of the large Nod base. It will likely be killed, but this prompts Kirce to call in reinforcements in the form of Orcas. However, they have no place to land. Build an airfield and put it down to allow the Orcas to land and give you a hand with the Nod vehicles.

At this point, build another engineer and have it capture the Tiberium spike to the north of the bridge to accomplish another hidden objective. 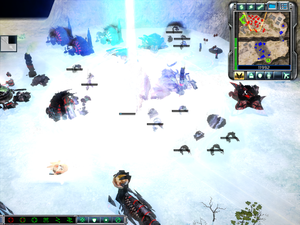 A single blast is all it takes.

Once your Orcas have arrived, have them make runs against the Nod base. After a few runs or so, the enemy will deploy deadly SAM sites. Don't bother sending Orcas against these - it is a waste of time and money. The vehicles prevent a land assault as well.

Now, however, you have access to the Ion Cannon. Click on its icon on the left of the screen, then target the middle of the enemy base. The Ion Cannon then activates, and after a short burst of blue light, the Nod base is reduced to a shiny crater.