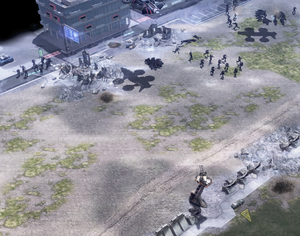 The Watchtowers cut through enemy infantry. 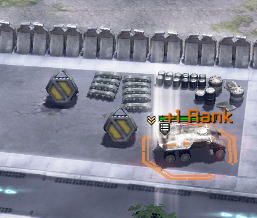 When you have a moment, grab these crates slightly north of the Pentagon.

This mission starts out looking hectic, but in reality is quite easy. To the west of your unit's starting position, you'll see several Nod militants attacking a group of power plants. Although you can easily save them, you can also easily lose them if you dawdle; charge forward and defend the power plants with everything you have. It shouldn't take long or be too difficult; ensure your units focus fire on one enemy at a time. Capture the power plants with your engineers to bring them back online. Once you've taken all the power plants, the watchtowers surrounding the Pentagon come online and slice through the enemy infantry.

Ensure, however, your unarmed engineers stay away from the conflict.

Afterwards, accomplish the next objective by sending an engineer into the Pentagon. An enemy infantry wave will come and be slaughtered by the towers, but the enemy retaliates quickly; Vertigo bombers fly in and destroy the power plants, bringing all your watchtowers offline. Without power, you'll have to resort to using riflemen in the guard towers; order your riflemen into the guard towers and watch them work their magic against enemy infantry. 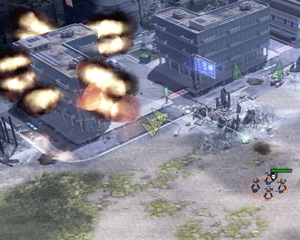 Grenadiers clear the garrisons for you.

Eventually you'll also receive more reinforcements in the form of grenadiers and APCs. Order your grenadiers into the APCs and have them take a stroll around the city. The grenadiers will attack from out of the APC and annihilate the garrisons. Continue destroying garrisons at your leisure, although you only need to destroy four of them. 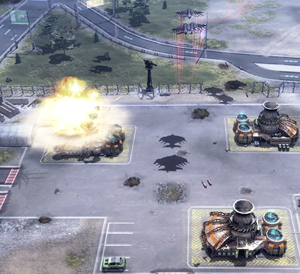 Ensure your APCs do not take too much damage, however. While tough against machine guns, they can only take so many rocket hits. Pull your damaged APCs out and exit the units inside so they do not die with the APC if it explodes.

Once you're ready, send all the units you have to destroy the forward Nod base. It should put up minimal resistance. Destroying it will bring in three riflemen inside APCs.

Once you're all done, head north and take down the Nod base. Focus on any defences first, then aim for the base's buildings - that is, a Hand of Nod, a Crane, and an Air Tower. It's guarded by a lot of militants, but your APCs should make short work of them. The biggest threat you'll meet is a laser-equipped raider buggy. Focus your fire on it, and it should quickly go down. Nod also has some attack bikes, but they are easily destroyed. Once all the defending units are down, move in on the buildings to end the mission.