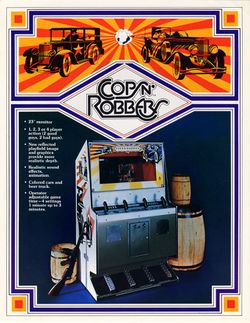 Cops'n Robbers is a racing arcade game, which was released by Atari in 1976; it utilizes a Motorola M6502 (running at 894.886 KHz), and up to four players must use a vertical 2-way joystick to aim the (window-mounted) gun for a Thirties-style car (1P and 2P are the cops on the left side of the monitor, while 3P and 4P are the robbers on that right side), with a single pedal to make them accelerate, and one button (to make them fire). If either 1P or 2P hits 3P or 4P, their cars will fall off the bottom of the screen, and the figure under that "COPS" text at the top of it will increase by one - but if the opposite happens, 1P or 2P's car will fall off the bottom of the screen, and the number under the "ROBBERS" text will increase by one. The shot car will then drive back up into view from the bottom of the screen to rejoin the game; a beer truck will also occasionally drive up into view, in the centre lane, which the players will have to shoot round. Whichever team has the most points when that timer in the bottom-right corner of the screen runs out (it starts out at between 60 and 180 seconds - depending on how the cabinet is set) will be declared the winner, and it is also worth noting that if there are only one or two players, 3P's car shall be controlled by the CPU (and, if there are two players, 4P's car as well).