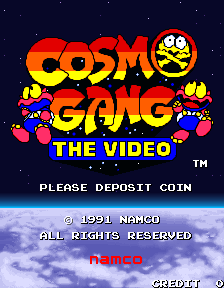 Cosmo Gang: The Video is a fixed shooter arcade game that was released by Namco in 1991; it runs on the company's System 2 hardware, and features characters from a redemption game that was released in the previous year, and licensed to Data East for US manufacture and distribution. The American version of the game, unlike those of Tank Force and Steel Gunner 2 (both of which were released earlier in 1991), also did not feature the Federal Bureau of Investigation's "Winners Don't Use Drugs" screen in its attract mode - and it would take until F/A got released as "Fighter & Attacker" in the United States before the screen was seen on a vertical monitor in a Namco game.

In Cosmo Gang: The Video, the players must take control of two spaceships (1P's is yellow, and 2P's is white), which are positioned at the bottom of that screen; the Cosmo Gangers will fly into view from the left and right sides of the screen while firing hails of bullets down at them before taking their place in a formation, but some of them will break away from the formation to fly directly towards them. They will then begin to attack them - and the gameplay is similar to Namco's older Galaxian games, except for the facts that two players can play simultaneously, some of the enemies leave "powerups" behind when killed, the players' ships cannot get captured and retrieved, and the "Challenging Stages" are a video version of the original "Cosmo Gang": the players must endure twenty-four seconds without the Cosmo Gangers stealing their energy containers (their ships are also changed to look like light-guns).