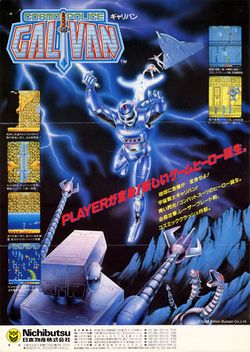 Cosmo Police Galivan (also known simply as Galivan) is a single player platform shoot-em-up developed by Nichibutsu and released in Japanese arcades in 1985. In the game, the player takes on the roll of a "Cosmo Police" officer who runs and jumps around a multi-directional scrolling cave system, destroying or avoiding waves of constantly attacking robots, aliens and alien ships. The game is said to have been inspired by the Japanese telefilm Space Sheriff Gavan.

The player starts the game as an unarmed human, whose only attacking options are kicking and punching, but picking up a POW item encases the human in a robotic suit and arms the player with a laser gun. Collecting the blue POW items while in the suit awards the player with a powerful beam weapon for a limited time, while the red POW item gives the player a three-shot cannon. POW items are dotted throughout the levels and can also be gained by shooting the blue robot aliens.

The player's character has an energy bar that decreases whenever the player is hit. Should this fall below the halfway point, the robot suit will be lost and the player will once again be an unarmed human. Collecting a POW item while in human form will restore the player's energy. If a POW is collected while wearing the suit, however, the player's energy will NOT be increased but their weapon will receive a power-up. The game's platforms are littered with springboards that fire the player high into the air when stepped on. Some platforms - often containing POW items - can only be reached via a springboard.

The game only features two levels which, when completed, repeat endlessly. Several home computer versions were released in Europe in 1986, including on the Commodore 64, Amstrad CPC, and Sinclair ZX Spectrum. None were incredibly well received. However, in 1988, Nichibutsu published a substantially altered conversion of the game for the Nintendo Famicom, which added several RPG-like elements to the game (see Cosmo Police Galivan (Famicom) for more information.