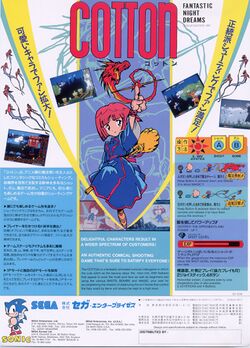 Cotton: Fantastic Night Dreams is a scrolling shooter video game developed by Success and originally released at the arcades in 1991. The first installment in the Cotton series, players assume the role of the young witch Cotton who, alongside her fairy companion Silk, sets out on her broomstick on a quest to defeat several monsters and get her Willow candy. Its gameplay mainly consists of shooting mixed with role-playing game elements using a main two-button configuration. It ran on the Sega System 16 hardware.

First launched in arcades, it was later ported to multiple platforms, each one featuring several changes or additions compared with the original version. Cotton proved to be popular among players in Japanese arcades, earning several awards from Gamest magazine, however the console ports have been met with mixed reception from critics. It is regarded as a key title in the "cute 'em up" sub-genre.