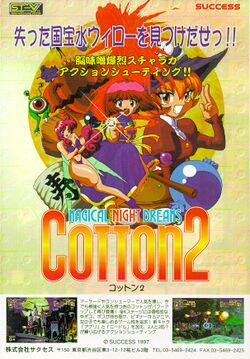 Cotton 2: Magical Night Dreams is a 1997 scrolling shooter arcade video game developed by Success and published by Tecmo. The fourth installment in the Cotton franchise, it is the arcade sequel to Cotton: Fantastic Night Dreams. In the game, players assume the role of either the titular young witch or her rival Appli who, alongside their companions Silk and Needle, sets out on a quest to defeat several monsters and retrieve the missing "Bluewater Willow" candy to Pumpkin Kingdom. Its gameplay is similar to the first game, consisting of shooting mixed with fighting and role-playing game-esque elements using a main three-button configuration. It ran on the ST-V hardware.

Headed by Takato Yoshinari, Cotton 2 was developed by members at Success who previously worked on the original Cotton. The game was later ported to Sega Saturn. In 1998, a remixed arcade edition titled Cotton Boomerang: Magical Night Dreams was released by Tecmo with additional characters, new gameplay and scoring systems, as well as altered stages and visuals. Both Cotton 2 and Cotton Boomerang were met with positive reception from critics since their release on Saturn, most of which reviewed them as import titles, for being faithful conversions of the arcade originals.