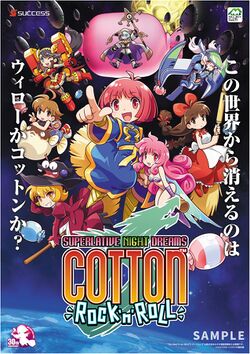 Cotton Fantasy: Superlative Night Dreams known as Cotton Rock 'n' Roll: Superlative Night Dreams is a scrolling shooter video game, co-developed by Success and Studio Saizensen, and originally released in Japanese arcades in 2021. It was ported to Nintendo Switch and PlayStation 4. A PC version is also planned. The sixth installment in the Cotton franchise, it is a follow-up to Rainbow Cotton and the first main entry of the series in over 20 years. In the game, players assume the role of young witch Cotton or any of the six additional characters, each one having their own gameplay style, on a quest to defeat enemies and bosses to retrieve "Willow" candy for Fairyland from the villainess Tacoot. It runs on the ALL.Net P-ras MULTI Ver.3 hardware.

Cotton Fantasy was a co-creation between Success and Studio Saizensen, known for their work on the Umihara Kawase series, being directed by Toshinobu Kondo and produced by Shinya Nagatomo. Nagatomo felt it was important to revive the Cotton franchise, as no one at Success were making games with the IP, and submitted a proposal for its revival during a call for projects within the company. The team sought to appeal both casual and core players, without losing the series' esssence while staying close to the original formula. Nagatomo wanted to include gameplay systems from past shoot 'em ups by Success via guest characters, while characters from past Studio Saizensen releases were also included, to portray it as an all-star festival. It garnered generally favorable reception from critics.