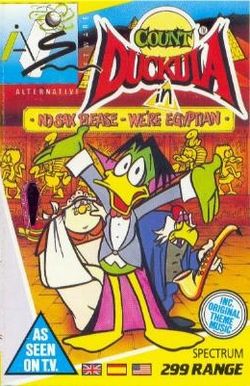 Count Duckula (full title: Count Duckula in No Sax Please, We're Egyptian) is: a platform game that was developed by Enigma Variations for Alternative Software, and released on the Sinclair ZX Spectrum, Amstrad CPC and Commodore 64 in 1989 (and on the Commodore Amiga in 1990); it's based upon the first episode of the Cosgrove-Hall, Carlos Alfonso Studios, and Thames Television series of the same name. Due to technical limitations, the ZX and CPC versions were presented in gray - however, the Commodore 64 and Amiga versions are presented in full colour (and the latter also incorporates an extra "snap" game, reminiscent of the Spade Panels in Super Mario Bros. 3).

This is from the back of the cassette's, or disk's in the case of the Commodore Amiga version, inlay card, the front of which is shown in the image to the right; however, the name of the Pharaoh in the actual episode was not "Upanatem" (a pun upon "up and at them"), but "Zooten-Simoon" (a pun on "Tutankhamen", who had previously appeared as the first boss of Konami's Koi no HotRock, 1986):

Count Duckula and his faithful servants Igor and Nanny have transported
themselves and their castle over to the land of the Pharaohs, Egypt. There they
decide to search for the mystical Sax, an ancient saxophone with strange
magical powers. They know that the Sax is hidden somewhere in the tomb of the
great Pharaoh Upanatem, a gigantic pyramid in the middle of the desert. What
they do not know is that they have also brought along some unwanted guests in
the shape of the Crow Brothers.
© Cosgrove-Hall Productions 1987, 1989