This map is another favorite and the environment is the same as de_dust_cz, the only thing that changes is the layout. There are two bomb sites and each has three access points for both teams.

Bombsite A is a series of boxes on an elevated tiled platform. There are many boxes and oil barrels which can provide cover from a rush by the Terrorists (T's). A is much closer to the CT spawn than the T spawn, enabling the CT's to set up an ambush.

Bombsite A can be accessed from a long open strip near the far side of the map, commonly referred to as "Long A" as it takes the longest route to the bombsite. The advantage of going this way is the AK-47 has the power at range over the M4, so the T's can pick off the CT's before engaging in a close battle. The T's also have the advantage of a sloping ramp for cover, commonly referred to as "The Pit". From this point, the T's have cover and can fire and retreat to a safe position. The disadvantage is that the CT's can make it to the entrance to Long A at or before the same time the T's can, and the T's have to make it through a small tunnel before entering. This position leaves them vulnerable to HE Grenade attacks as well as a spray n' pray rush by the CT's while in a confined area, limiting chance for retreat. 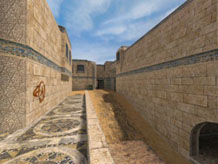 Another method of getting to bombsite is going down the middle of the map and taking the elevated path on the right side of the map. This method is faster than Long A but it is much closer range after entering the bombsite, allowing the CT's to camp behind obstacles and pop out at the opportune time in an ambush.

There are two ways to attack through short A:

The final method of getting to the bombsite is through CT spawn. This is rarely used in an attack in the initial phases and is typically reserved for late round battles between two or three players.