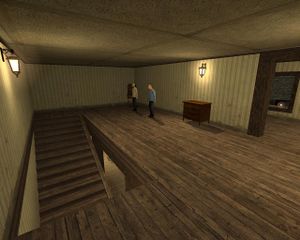 The inside of the hostage building.

As with cs office, you have two options: stay near the hostages (the upper part of the map), or rush to meet the counter-terrorists.

If you rush to meet the counter-terrorists, there are many places at which you could do so, and thus it's less likely that you'll run into a significantly larger group, and you'll have a better chance of survival.

The first route you could take goes down the main covered passageway to the marketplace. Taking this route is inadviseable, since the counter-terrorists can easily wait on both sides of the bottom of the passageway, and ambush you. Additionally, there are no real hiding places on the way down the passage, so if they decide to pop out and shoot you, you have no options.

If you make it to the bottom of this passageway, you can run round any way you like, and most likely end up behind some counter-terrorists; who you can easily take down. The best thing to do is to run around the lower half of the map for a minute or two, clearing out the counter-terrorists, then head back towards the hostage building, to make sure the hostages aren't being rescued.

Going right, away from the spawn area and hostage building takes you to the first bridge and underpass. If you jump off here, you can either go straight forwards and meet the counter-terrorists head on in the alleyways (if you're good at headshots and have a flashbang ready for the corners, this is a safe bet).

However, if you turn off to the right after jumping off the bridge, you can travel underneath some of the map, and appear on the raised section on the rightmost area of the map. Few counter-terrorists come down this way, and the darkness is to your advantage, so this is a highly recommended route to take. If you're quick, you can emerge before the counter-terrorists have finished moving past the exit area, and you can contribute to eliminating a few of them. A better strategy, however, is to wait until they've passed, and then shoot them in the back as they walk away. Again, spend a minute cleaning up the lower half of the map, then head back towards the hostage building.

The final rush strategy is to continue over the first bridge, and the second, and travel through the building on the other side. You will almost certainly meet some counter-terrorists here, and they could be either rushing or camping one of the larger rooms. It is highly adviseable to carry some flashbangs and frag grenades with which to flush them out. Once you've reached the other side, you can go back towards the hostage building any way you like, and clean up.

The camping strategy involves staying in the general vicinity of the hostage building (i.e. always have it in sight), and constantly checking all three possible attack vectors. It is a good idea to have a few people inside the building itself – perhaps one with a sniper rifle at the window – and some waiting at the top of the stairs to save the day if some counter-terrorists break through all the other defences.

The buildings on the left are rarely traversed by terrorists, and provide an easy and safe route through to the stairs in the middle. However, if terrorists are going that way there will be a collision in the middle and the terrorists will probably win, as they have a more effective position for flashbanging and throwing grenades. A good tactic in such situations would be to backpedal and take a different route.

The buildings in the middle are a safe bet, as counter-terrorists have the advantage in the winding corridors inside the buildings. However, you should watch out for terrorist flashbangs and frag grenades, and perhaps pack a few of your own, depending on the terrorist team on the server and how often they venture into the buildings. Another thing for which you should be alert is the fact that terrorists sometimes have the nerve to sit at the end of the path from the buildings to the hostage building with a sniper rifle, and take down anybody who emerges from the buildings. In this situation, unless you're supremely confident in your abilities, it is again best to backpedal and find a different route.

The stairs in the middle are not such a good idea during the early stages of the round, as there are many places a terrorist could be hiding to shoot you as you come up the stairs, and they're all quite well hidden. Later in the round, however, these stairs are usually the primary route for counter-terrorists coming to rescue the hostages.