de_dust2 is one of the most popular bomb defusion maps in Counter-Strike: Source. It is set in the Middle-East, and has the two teams start on opposite sides of the map, the counter-terrorists quite close to both bomb sites, and the terrorists not too much further away. 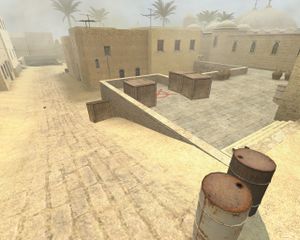 The terrorists start at the top end of the map, far away from both bomb sites. To their right is the pair of doors which provide a long-standing battle with any counter-terrorists moving that way ("long A"), to their left is a hall which also provides long and grenade-filled battles (leading to bomb site B), and forward is the main ramp, which is a good point for attack. If there are any snipers on the terrorist team they should stay at spawn for the first few seconds of the game, as it is possible to snipe down any advancing counter-terrorists through the tunnel, down the ramp and through the doors at the bottom.

A small group should always defend the double-doors on the right from any advancing counter-terrorists, as if any get through, they can sweep round behind the other terrorists and kill them. Throwing flashbangs and frag grenades into the double-door area is a highly effective tactic. 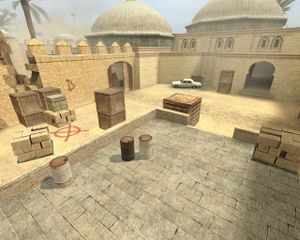 To the right of the spawn point is the double-door, which is highly dangerous. It is sometimes a good idea for snipers to position themselves here, or the terrorists will break through and cut the counter-terrorists up from behind. Flashbangs, smoke grenades, frag grenades and lots of patient waiting will probably be needed to gain a victory at the double-doors, but be warned that the terrorist team will most likely be doing the same, and somebody will have to break the stalemate at some point. It is possible to gain access to the tunnel from the double doors, and take unsuspecting terrorists by surprise. The tunnel is past the double doors and to the right, it will likely require flashbangs or smoke grenades to get to the tunnel past terrorist snipers. It is ill-advised to rush straight up the centre of the map from here, as the terrorists have a straight line of sight from their spawn down through the doors, and any snipers will cut adventurous counter-terrorists down.

To the left of the spawn point is bomb site A. One of the exits from it, known as "A short" leads down some stairs to the middle of the map. This is to the right of bombsite A, if you are looking towards the terrorist starting point. A small group of players rushing this route with flashbangs can be tactically beneficial, however it should be expected that the terrorists will try the same thing, so if you plan to use this tactic, prepare for a close range fight. Once any terrorists in the centre of the map are neutralised, the counter-terrorists have the choice of where they go. Two good choices are the tunnel leading to bombsite B (this is next to the double door) or the corridor leading to bombsite A (head towards the terrorist's spawn point then enter the doors on your left), shooting any terrorists in the back: this strategy is especially useful if it's early on in the game.