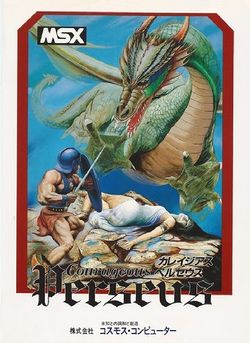 You play as the legendary hero Perseus who sets out to an island full of mythical beasts in order to save the Pleiades Maia, Celaeno, and Asterope. Perseus starts with 2000HP, but his health is constantly being drained one point per second. Enemies are attacked simply by bumping into them while holding the Space bar pressed.

Located in the south of the ocean is an island, where at one time resided a flower garden inhabited by three Goddesses of beauty named Maia, Celaeno, and Asterope. However, the island was invaded by a Gorgon and her followers. The Goddesses entrusted the Twelve Constellations to the residents of the flower garden, but they were found by the Gorgon and their hearts were turned evil.

The sorrowful voices of the Goddesses reached Zeus in the world of the heaven, and his tears became rain that wetted the ground. Zeus called the Hero Perseus, and a sacred shield and sword were bestowed on him by the Goddess of Wisdom Athena and the Messager God Hermes. Perseus then headed of to the southern island.