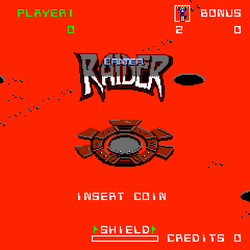 Crater Raider is a multi-directional shooter arcade game that was released by Bally Midway in 1984; it runs upon the company's MCR-3 hardware but without a TMS-5220 or DAC for speech. The player must use a rotary controller to take control of a futuristic blue tank, which is trying to rescue hostages upon an alien planet covered with craters - and if you go down one for extra points, it will warp you to another part of the planet, and double your hostage bonus if you have one or more on board. Also, if you go down any crater that has a green flag near it, it will extend your tank's "SHIELD" meter, at the bottom of the screen; by pressing down on that rotary controller, your tank's shield shall be activated and, it will become invulnerable, being able to kill the evil red alien tanks (which are palette-swapped versions of it) on contact, without getting killed itself. Once the shield time has run out, it will become vulnerable again - and the only way it may kill the red alien tanks then, is by firing shots at them (but they may do the same to it). If you should get killed with one or more hostages on board, that text "X (hostage sprite) LOST" (X being the number of hostages you had aboard at the time), will appear on the screen; you can then not receive the full hostage bonus for the stage, and if one of them was the last one on it, the game will proceed to the next one, just as if you returned them to your base safely.