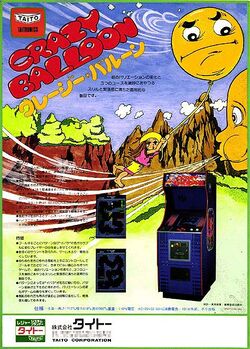 Crazy Balloon is an arcade game which was released by Taito Corporation in 1980; it utilises a Zilog Z80 microprocessor (that runs at 3.072 MHz), along with a Texas Instruments SN-76477 and discrete circuitry for its audio. The player must use four directional buttons to direct a red balloon (which is the eponymous "Crazy Balloon") through a maze of pinwheels (which must be avoided, as they will burst it on impact) - and passing through a cyan obstacle is worth 10 points, while passing through a green one is worth the much higher value of 200, passing through a magenta one is worth 300 and passing through a yellow one is worth 500. The bonus for reaching the maze's goal also starts at 1000 points but begins to decrease in 20-point increments after a short period of time, and "Hurricane Men" shall appear on the sides of the maze with intentions to force Crazy Balloon off-course into the pinwheels; furthermore, Crazy Balloon will burst automatically if it remains stationary for five seconds. There are three different types of mazes and they shall advance every time Crazy Balloon reaches one of their goals - and at 5000 points, Crazy Balloon shall receive an extra life by default (it starts with between two and five, determined by how the cabinet is set), but this setting can be changed to 10000 points.

Although this game was initially only converted for the Commodore 64 by Software Projects in 1983, Taito themselves did go on to include it in a Sony PlayStation 2 compilation, Taito Memories Gekan, in 2005; this compilation was later rereleased as "Taito Legends 2" when it was brought to Australia and Europe in the following year and the United States in 2007, and the European version was also released on Microsoft Xbox and Microsoft Windows. In 2006, Taito featured this game in another of their compilations for the Sony PlayStation Portable, Taito Memories Pocket, which was rereleased as "Taito Legends Power-Up" for Australia and Europe later in that same year, and the US in 2007.